SUFFUSED WITH A SUIT OF ELECTRIC BLUE THIS BUNTING’S SCINTILLATING LOOK IF FINISHED OFF WITH A VEST OF ROSE RED AND SALMON PINK! 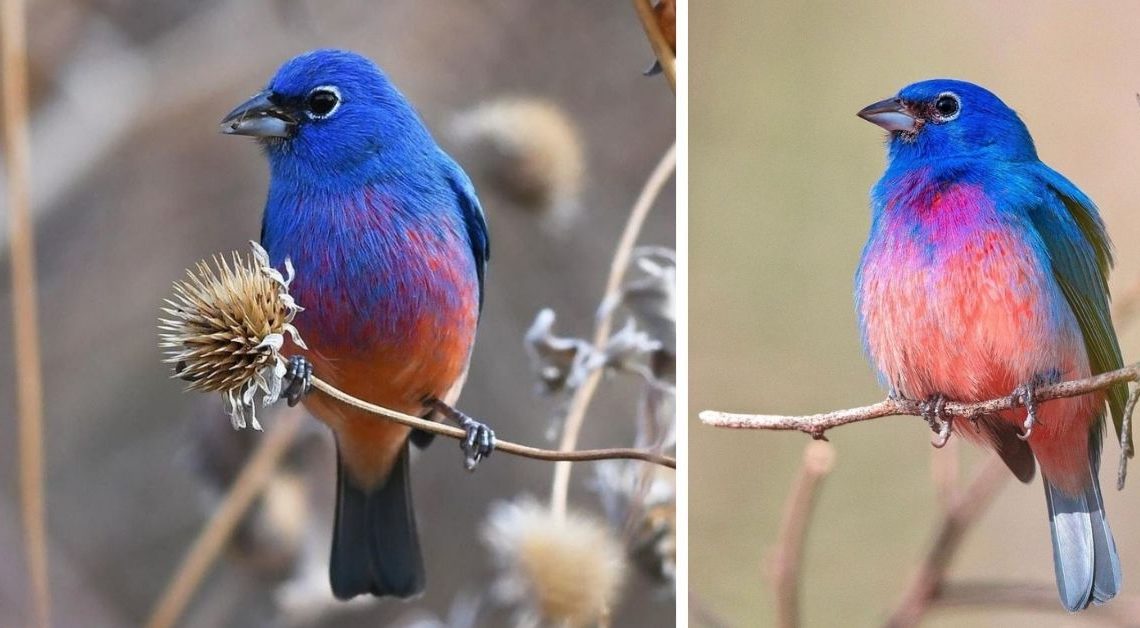 A beautiful bunting wearing an electric blue and rose-pink-colored vest!

The rose-bellied bunting or Rosita’s bunting (Passerina rositae) is a 3.5 to 14.5 cm (5.3 to 5.7 in) long bird and weighs in at around 19.5 to 20.5 g (0.69 to 0.72 oz). The male’s crown is purplish-blue and is electric blue on the rest of his upperparts that fades from darker to lighter towards the tail. His chin is grayish, the throat and chest blue, and the belly and vent area salmon pink.

Meanwhile, the adult female’s head and upper parts are gray-brown with a bluish tinge at the rump.

–A spectacular combination of flashy coloring is scattered across a tiny body, producing a finely feathered avian standout!

Her belly and chest are pinkish buff, warmer on the throat becoming paler towards the lower belly.

This bird can be found in and is endemic to a very small area of the pacific slope of southern Mexico.

The rose-bellied bunting forages alone or in pairs in the lower to mid-level of its habitat. Its diet consists of seeding grasses and fruit from trees and bushes.

These birds are usually seen singly or in pairs none more so than at breeding time. Though little is known about breeding or nesting behavior two nests were described in June and July of last year. The nests were built of an open cup made from dead leaves, shredded bark, and fine weed stems. Both were built in a sampling, one 1.5m, the other 4m above ground level. 3 to 4 eggs were laid within.

The IUCN has assessed the rose-bellied bunting as Near Threatened “because it has a small range, which may be in decline owing to habitat degradation and infrastructure development.”

WATCH AND LISTEN TO THIS BIRD RIGHT HERE IN THE VIDEO BELOW: