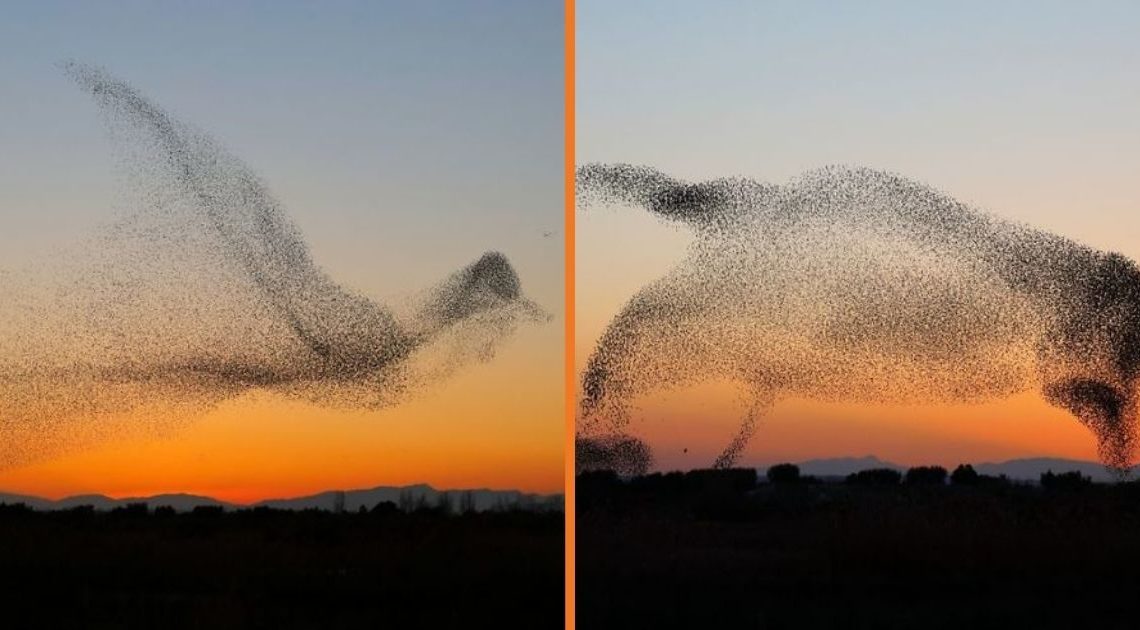 Nature is full of beauty, and every now and again, we get hit with a perfect coincidence that leaves us in awe

This is exactly what happened in the images below when a flock of birds formed a shape-shifting cloud (murmuration).

The scene was captured over the Costa Brava in Spain, it is a real treat to see and often attracts bird watchers from all over.

The murmuration of birds will consist of hundreds, or sometimes thousands of birds, moving around in what appears to be a single organism.

It looks like the group of birds is coordinated, often moving into some amazing shapes.

The starlings most likely moved in this way as a result of a predator such as a hawk being in the local vicinity.

It was almost like they were creating this enormous giant single bird to show their predators how big they are.

The photos were captured by wildlife photographer Daniel Biber of Germany and earned him a prize in an international photography competition.

What’s more, is that Mr. Biber didn’t even realize what he had captured until later on, “Only when I checked the pictures on the computer later, I realized what formation the starlings had created,” he told the Daily Mail.

“I was so concentrated on taking pictures at the time that I hadn’t realized that the starling murmuration had created a giant bird in the sky.”

“I’ve tried to photograph the starlings but it never worked out as well as I hoped for.”

“I eventually drove to the spot every day for four days in a row in order to capture them. I picked a spot where I thought they would turn up and picked a matching foreground and backdrop in order to put them in a scene.”

“I realised that I had captured a unique snapshot, technically, sharp and in high quality”

“It usually happens that birds of prey turn up and the starlings then create bizarre forms. It can be quite erratic and completely random”