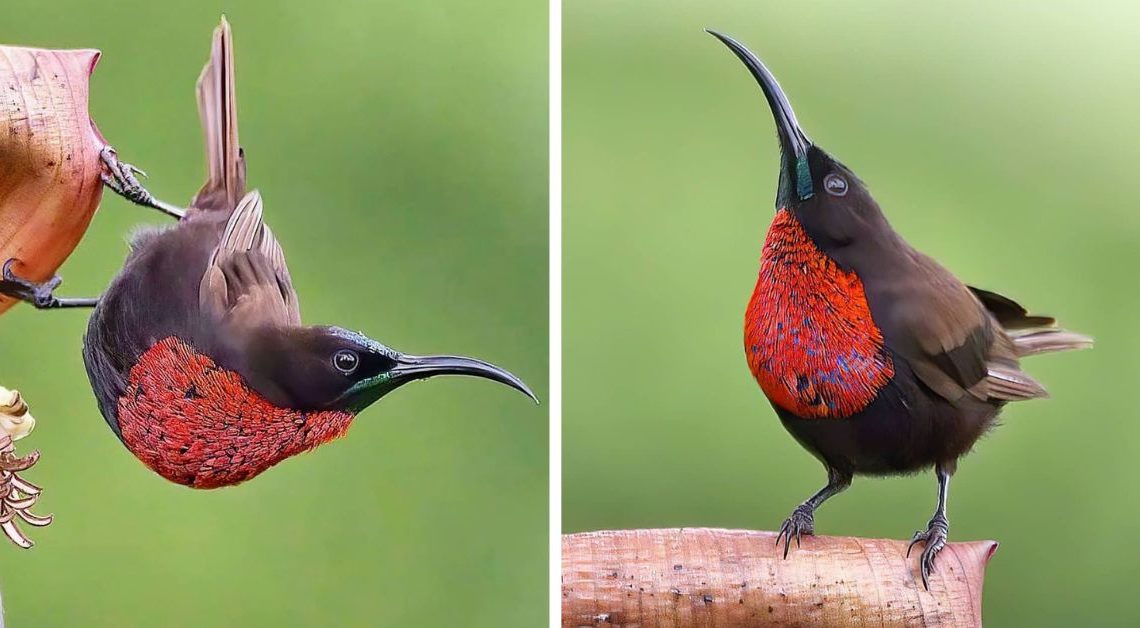 A spectacular, glossy velvet-black bird with a striking scarlet daub on the chest and an iridescent green crown and throat.

The scarlet-chested sunbird (Chalcomitra senegalensis) has a height of about 15 cms and weighs in at 14 gms. The male’s plumage is black, with an iridescent emerald green crown and chin. The throat and upper chest are scarlet. The feet, legs, and bill are black. The eyes are brown.

The male Chalcomitra senegalensis has physical features that are slightly different from the female bird.

–Suffused in a suit of electric blue, this bunting iridescent look is finished off with a vest of royal rose red and salmon pink!

The female Scarlet-chested sunbird’s plumage is greyish olive above, with heavily mottled underparts, which helps to distinguish them from the female African black sunbird.

This species is found in sub-Saharan Africa, from southern Mauritania and Guinea to Ethiopia and south to northern Namibia and north-eastern South Africa.

The scarlet-chested sunbird is primarily found in dry savannas and scrublands. However, they can also be found in dry grasslands, orchards and rural gardens, arable land and urban parks and gardens.

The scarlet-chested sunbird feeds on nectar, insects, and spiders. This sunbird favors nectar from aloes and will feed by either perching or hovering.

While Scarlet-chested sunbirds can breed year round, this varies between different parts of their range. The female builds an oval-shaped nest suspended from the tip of a branch, around 2-10 m above the ground. The nest is made out of grasses, dead leaves, plant down, and spider web, decorated with seeds, leaves, strings, feathers, and sometimes even pieces of paper. Within the female lays up to 3 cream, greenish or pinkish eggs with dark markings. She incubates them for around 13 to 15 days. Once they hatch the chicks are fed by both parents and become fledged 15-20 days after hatching.

This bird is regarded as of Least Concern on the IUCN Red List, having a very large breeding range, and is described as abundant and widespread in savanna woodlands. The population is suspected to be stable in the absence of evidence for any declines or substantial threats.

YOU CAN WATCH THIS BIRD RIGHT HERE IN THE VIDEO BELOW: