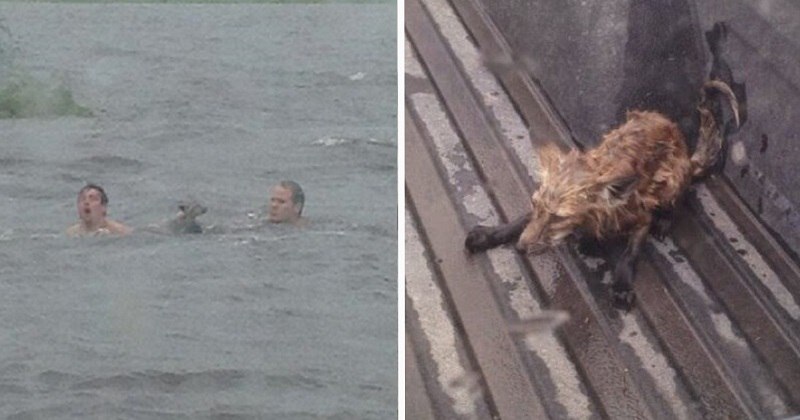 Meet Colin Graham and Jordan Olson, the two Canadian men who have been labeled heroes thanks to their acts of kindness to animals in need. They came to rescue two foxes after spotting them trapped in floodwaters caused by a torrential downpour. The rescue happened in Welwyn, a village about 250 kilometers East of Regina. At first, Colin and his sister found a young fox stranded on top of a rock that he estimated was about two meters of floodwater.  Witnessing how frightened the fox was, Colin and his friend, Jordan Olson, decided to dive in and rescue it. Two meters of water didn’t stop them from swimming through a field to save the poor fox. “[They] have been sitting out on this rock pile near our house for all spring. My sister wondered what happened to the foxes, so we drove out there, and there was just one rock sticking out of the top of the water. One guy I was with, Jordan Olson, suggested that we should probably just go out there and swim and get it,” Colin said.

Colin said it was difficult to catch the helpless fox as it was no bigger than a tiny kitten. But finally, they were able to catch up to it, put it safely in their truck, and took it home. “When I first got there, he had a little bit of energy, and he bailed off the rock and into the water and tried to swim away. But I was able to catch up to him. We put it in the back of my truck, and our house is right close there, so we took it home, dried it off, and got it warmed up,” Colin said.

Later that day, the mother fox appeared and reunited with her baby. “Then we were driving later and we saw the mother out there so we took him back. They’re reunited,” Graham said, laughing. “I saw them running around the other day.” The rescue was filmed and shared on Twitter by one of their friends, Derek Roeher. Needless to say, it went viral, and people couldn’t get enough of the men’s heroic actions.

How wonderful it is to know there are people out there who are willing to help animals in need. If you have rescue stories, please share them with us! We would love to hear about them in the comments section below!