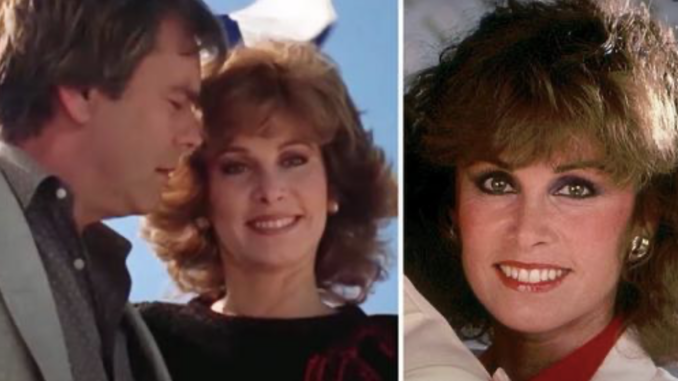 Actress Stefanie Powers, 78, was born as Stefania Zofia Federkiewicz on November 2, 1942, in Los Angeles, California. After her parents divorced, she continued living with her mother who was a big fan of ballet and classical music. In fact, it was this love that was later passed on to Stefanie who attended ballet at the Michele Panieff Ballet Company along Natalie Wood and Jill St. John.

Shortly after, Stefanie’s interest switched from dancing to movies and acting. When she was 15, she auditioned for the role of Velma in West Wide Story, but didn’t get it due to her young age. However, this audition helped her attract the attention of a director at the American School of Dance who encouraged her to audition for a role in his movie.

This led to her to attend classes at 20th Century Fox, MGM Studios and Columbia and sign a contract with Colombia Records.

“That was the beginning of my contract with Columbia Pictures. I was tied for seven years; in those days if you signed a motion picture contract you were not allowed to do television,” Powers said. After doing several movies with them, MGM Television bought her contract from Columbia to present her as The Girl from U.N.C.L.E. (1966) a spin-off of The Man from U.N.C.L.E.

This series was a short-lived one but very popular at the same time and it opened the doors for Powers to some even greater movies. In 1979, she got the role that marked her whole career, that of freelance writer Jennifer Hart. Starring alongside Robert Wagner, the series was a huge success.

“You don’t want to hope too much for something to click,” Powers told TV Insider in 2019, speaking of the beginnings of the series when no one knew whether audiences would love it or not that much. “Yes, we were picked up. But the feeling of how much do people love those characters? We didn’t feel that until we went out into the world.”

“‘Do you remember, Stef? We did about six shows, and I walked into your dressing room and you had tears in your eyes’ and said, ‘Do you think it’s going to be good? What are we doing?’ We loved doing it but were very anxious,” Robert Wagner added.

The onscreen chemistry between Roberts and Wagner was undeniable and people found it hard to believe that the two weren’t an actual couple in their real life. In fact, Wagner was married to Natalie Wood at the time and he and Powers were just very good friends. The two are very close even today. “We adore each other,” she said of her relationship with her lifelong friend. “Robert and I live in separate parts of the world, but he’ll visit for dinner at times.”

During the filming of The Girl from U.N.C.L.E., she met actor Gary Lockwood at a party and the two tied the knot. However, just six year later, they divorced. Shortly after, she started dating  Academy Award-winning actor William Holden after meeting him at a party at the La Costa Spa.

“I don’t know why Bill decided to attend, as he was normally a loner, but happily he did. We met again, and by now, while he might very well not have remembered our previous meetings, he had seen some of my work, so he did not regard me as a stranger. As the cocktail hour was coming to an end but our conversation was not, he asked me to join him for dinner, and I accepted,” she wrote in her biography One from the Hart.

“Having filed for divorce, I was a free agent, so there was no reason not to be seen out with someone, even this someone. Ever discreet, Bill chose a quiet local restaurant. Our attraction was undeniable, but Bill was from the old school and maintained a certain formality.”

Sadly, Holden died of intoxication in 1981 at the age of 63 in his home in Santa Monica, California. In 1993, Powers married her second husband, Patrick Houitte de la Chesnais, and divorced him in 1999.

In 2008, the actress was diagnosed with lung cancer. Her battle was long and tough but she ended up a winner and she’s now inspiring others.

Throughout her rich career which has spanned six decades, Powers received numerous awards. She was nominated for five Golden Globe Awards and got a star on the Hollywood Walk of Fame in 1992. Today, at the age of 78, she is still active and plays at theaters.

Powers is a huge animal lover. Her step-father raised race horses and she has been around animals her whole life. “Growing up, my best friend was a large goat — one I used to pal around with until he ate my grandmother’s rose garden”, she said. “Both of us were banished. Everything that fell out of a tree or got hit by a car ended up getting brought to our house. We had a potpourri of animals, pets and critters.”

Today, she’s running the The William Holden Wildlife Foundation, an animal rights and wildlife conservation group and an education center in Kenya. It helps young children learn more about the animals and the nature.

I am heartbroken over the discovery of 8 tons of smuggled ivory in Singapore. Please continue the fight. Please boycott Chinese goods. #elephants #EastAfrica #ivory #conservation pic.twitter.com/GnLaI2IaE8

Currently, the actress lives in the U.S, The UK, and Kenya. “I don’t live anywhere; I travel between houses and residences. At this stage in my life and career I look for roles that are going to be challenging,” she says. “I didn’t become an actor to be myself, I became an actor to be somebody else and so, to the extent that I can, that’s what I look for.”

Powers still has a lot to offer to her fans and audiences from all over the world. She defies age and looks absolutely stunning.