Weigh Less Than 2g And Wear A Stunning iridescent Coat, The Bee Hummingbird Is The Jewel Of Nature 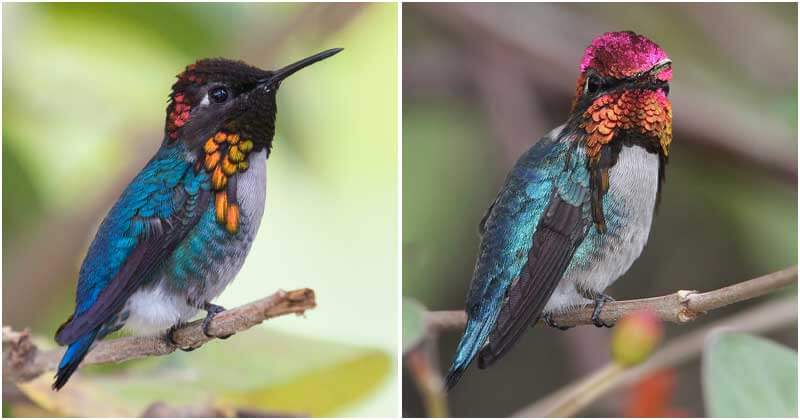 There are many breathtaking hummingbirds in nature. These creatures grasp human attention with their charismatic plumage. Their tiny look is also worth mentioning. This species is no bigger than a bumblebee. The bee hummingbirds are among these marvelous birds. The member of the hummingbird family is often mistaken with a bee. But it looks like a flying jewel with stunning iridescent
plumage. This coat is a harmonious and impressive combination of a number of colors, including pink, blue, and orange. You can never keep your eyes off these beautiful creatures when spotting them in real life. Like many other bird species that offer a different look between the male and female, the bee hummingbird is no exception. Female birds are covered with a beautiful blue-green color. Their underparts are also paler than the males. This spectacular hummingbird is considered the smallest bird in the world. It weighs less than 2g with around 5-6 centimeters long. The word “bee” in their name refers to these. And this hummingbird also makes the bees buzz when flying. So cute!

But the delicate beauty has made a name of this hummingbird. There is an interesting fact about these bee hummingbirds that they don’t migrate, unlike other hummingbirds. They enjoy living in the subtropical climate.

And, they flap their wings on average between 50-80 beats per second and flap up to 200 times per second when diving. It means that videos of this bird flapping its wings you see on the
Internet are in slow motion. Their main diet is nectar. But they sometimes hunt insects and spiders for food. When the breeding season begins, male bee hummingbirds turn into a fiery pink/red from head to throat, making them gorgeous in their colony. The plumage is also what helps them attract the female. After finding mates, female birds build their nests, lay eggs and incubate them. Interestingly, mothers don’t let fathers get closer to the nest to reduce the risk of being spotted by predators. Currently, the bee hummingbird is considered near threatened.