Two Shelter Dogs Can’t Live Without Each Other, Insist On Being Adopted Together 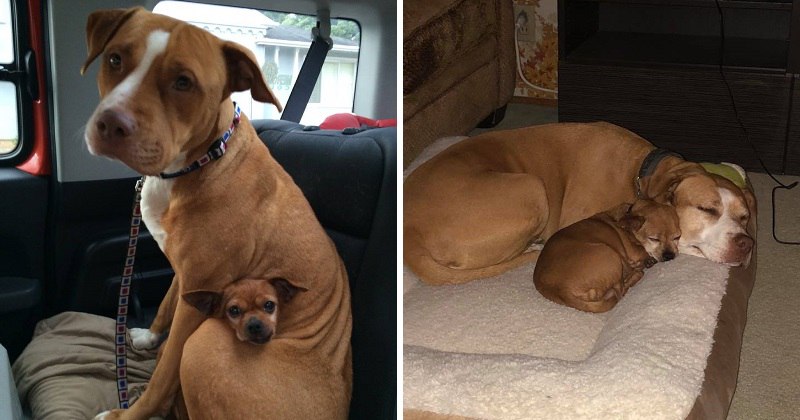 Bonded pairs don’t necessarily have to be family – they can be a duo of dogs. If you don’t believe us, scroll down to check for yourself!

Meet Merrill and Taco, a pit bull and a chihuahua who were surrendered to an animal shelter called Rocket Dog Rescue in San Francisco. Despite being two different breeds, they formed a strong friendship and become inseparable. They were always together, did everything together, and never left each other’s company. If they got separated, they would cry. Witnessing their bond, the shelter staff and volunteers understood that they couldn’t live without each other and needed to be adopted together. However, there aren’t a lot of people out there who are willing to adopt both of them. They then shared Taco and Merrill’s story on social media in hope of finding them a family. “These two love each other more than any bonded pair the shelter has ever seen. They cry when they leave each other’s side. This dynamic duo has lost their family, their home, and now we can’t let them lose each other!” The story quickly went viral and eventually found its way to a family in San Diego. They fell in love with both Merrill and Taco and decided to take both of them home. The family made sure that the two dogs were always together and were taken care of. They promised to share photos of the two to let everyone know how they were doing. Sadly, Taco passed away after three years of living with his new family. Although he left this world, he had a forever home and a wonderful life for his last three years. “Yesterday was a very sad day for us. Taco has passed away. He was a huge presence packed into a small package. When we adopted him we thought we would get a year. We got three. We feel so lucky to have had him join our family.” If you want to see more Merrill and Taco’s photos, you can follow them on their Facebook page.

What an incredibly sweet and heartwarming story! Please share it with your friends and family members!