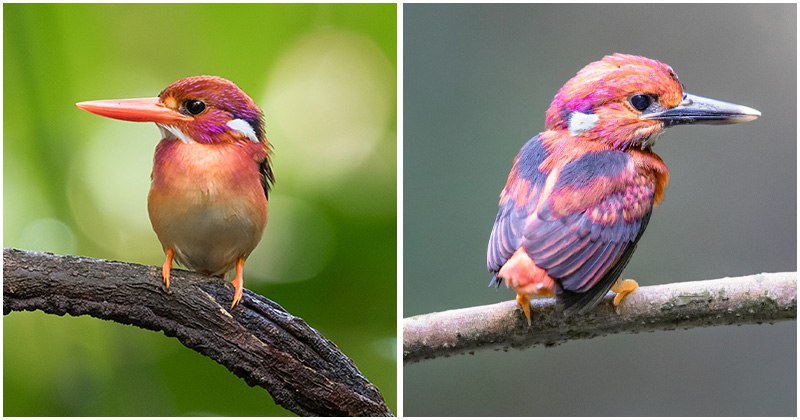 This fairy-like bird was first described in 1890, but it isn’t until 130 years later that we finally have the chance to admire its beauty in high-resolution images. Meet the South Philippine dwarf kingfisher, a striking critter that is just too perfect to be true.

Robert S. Kennedy Bird Conservancy’s director Miguel David De Leon and his team have been working hard for ten years straight to document this bird’s behaviors. As a Filipino field biologist, De Leon is only interested in the colorful wildlife of this archipelagic country.

At Mapawa Nature Park, the team found two nesting sites of the South Philippine dwarf kingfisher, but unfortunately only one of them remained untouched.

As we can see in the photos, that unique bird looks incredibly gorgeous with metallic lilac and orange coat, orange beak, yellowish belly and some blue spots on its head.

South Philippine dwarf kingfisher (Ceyx mindanensis) is a member of the family Alcedinidae that is native to the Philippines.

The bird was first described in 1890 by American ornithologist Joseph Beal Steere through an article titled “Steere Expedition to the Philippines”, in which he mentioned a list of the birds and mammals with localities and some brief preliminary descriptions of supposed new species.

According to what scientists have discovered so far, it is possibly the tiniest species of forest kingfisher in this country. This bird feeds on even tinier creatures, including earthworms, small lizards, and other invertebrates.

This charming species is spotted in the virgin and second-growth forests in the islands of Mindanao and Basilan. Of course, it is definitely not easy to catch a glimpse of this lovely creature as it has a habit of perching really quietly and darting invisibly perch to perch.

Unfortunately, this beautiful birdy is getting closer and closer to the brink of extinction due to habitat destruction, poaching and climate change.

“The biggest threat to the decline or loss of our endemic and indigenous species is habitat loss,” De Leon says. “Hunting and trapping for food or the illegal pet trade are contributory factors as well. Culturally, recreational shooting of birds using airguns or slingshots puts further pressure on bird populations.”