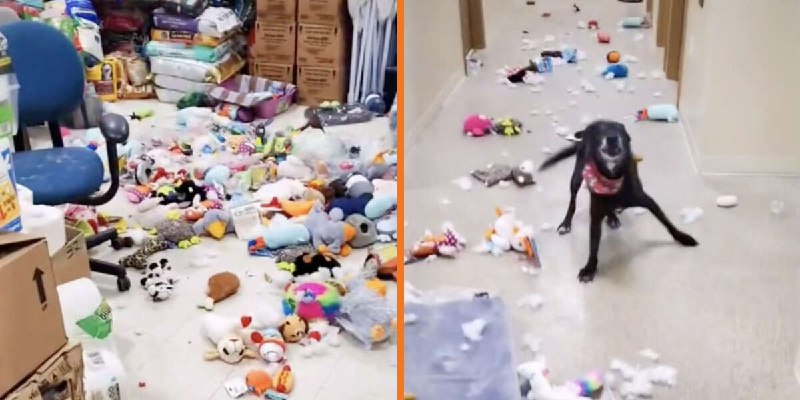 Meet Gilligan, an excitable pup who despite having many issues to overcome, is so lovely that he has been made the Office Greeter at a shelter

He has been at the Bedford County Humane Society in Pennsylvania ever since he was a young pup, and he absolutely loves being the greeter there.

“He is a wonderful office greeter,” employee Joyce Ross told The Dodo.

“Every time someone walks through the doors, he lets us know while he patiently waits for the visitor to bring him treats or even possibly a new toy. He has definitely made progress.”

One evening as the shelter was closing, a member of staff didn’t close the latch on Gilligan’s kennel properly.

After everyone had left to go home for the evening, Gilligan got out and was left alone in the shelter, so he threw himself a little party.

“He spent a long time checking to see if anyone was in the building. Once he realized he was alone, he went straight for the toys.”

“One by one, he pulled them out of the pile that we had just received from all of our Christmas donations, and he brought them in the hallway to play with them and to pull the squeakers out.”

Here’s the video showing the extent of how much Gilligan really let loose: 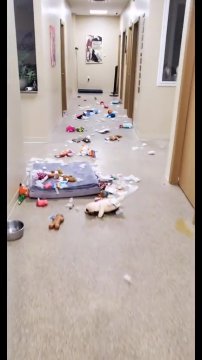 As soon as staff arrived at the shelter and saw all the mess, they knew right away who caused it, it was, of course, Gilligan.

And he didn’t even try and hide it, he was right there, prancing around, seemingly very proud of himself for the party he threw himself.

“He had no remorse and he was happy to see a familiar face,” Ross said.

It seems like Gilligan was only interested in toys and squeakers, and didn’t actually go for any food.

“Everyone at the shelter thought it was funny that, of course, he wouldn’t destroy anything in the building besides the dog toys, which had no chance.”

“First, we went through all of the toys to check for any survivors that could possibly be played with again. He spared most of the ones without a squeaker because that is what he was after.”

“Once we recovered some of the toys that could be reused, the cleanup was pretty easy.”