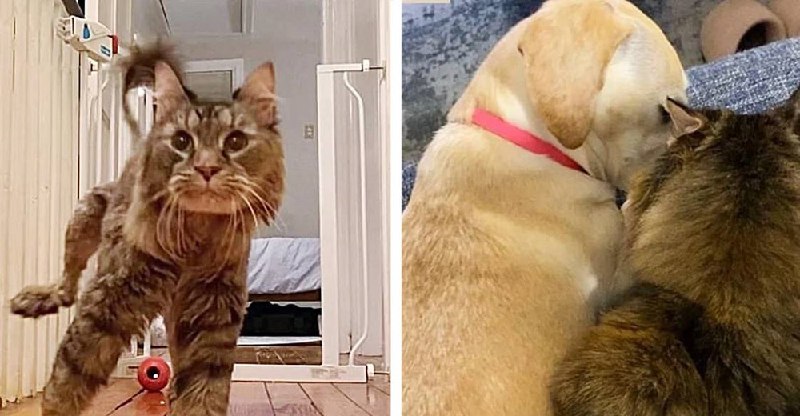 Recently, a kitten was transferred to the Animal Welfare League of Arlington (AWLA) in Virginia. She was completely matted, covered in grease and dirt, her health was quite delicate. An AWLA volunteer welcomed her and decided to name her Roberta .

A “different” kitten finds great emotional support in a dog. 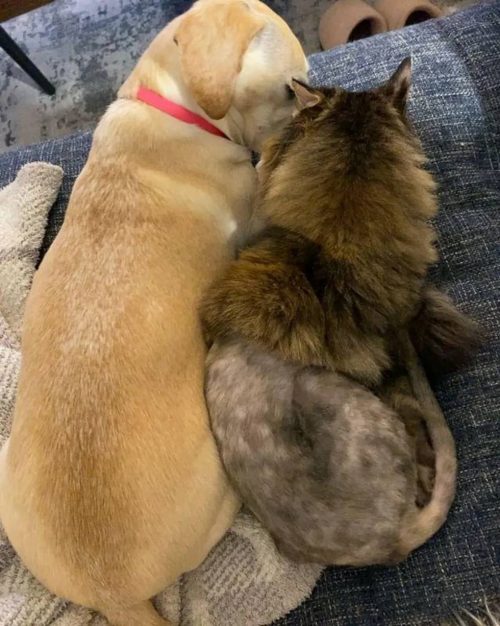 Although the tabby kitten’s status was intended to be grumpy, she turned out to be an adorable ball of fur who enjoyed the attention . Asa commented on this:

“He immediately came up to me and started purring , even approaching the resident dogs to say ‘hello’. She was so loving and trusting with humans despite being in such poor condition.” 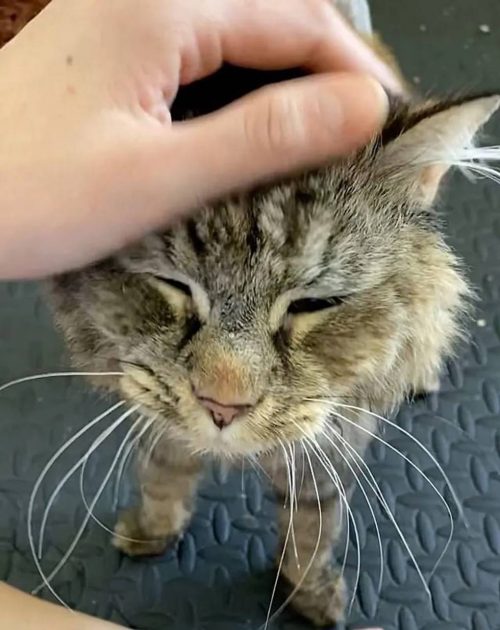 In the rescue center she was treated, they gave her a refreshing bath and carried out all the necessary tests. Roberta was diagnosed with cerebellar hypoplasia (CH) , commonly known as wobbly cat syndrome .

This condition causes her to stumble a bit when walking, but this does not limit her to being a very tenacious and determined kitten, she does not let anything stop her from having fun.

“CH is caused by an underdeveloped cerebellum, the part of the brain that maintains coordination and balance, resulting in jerky, wobbly movement .

It doesn’t cause them any pain, and cats with CH can live as long as unaffected cats,” Asa said.

When the sweet kitty arrived at her new foster home, it didn’t take long for her to befriend a rescue pup, Kona , a furry cat who loves cats. Noticing the new member of the family, she welcomed him with sweet kisses.

“In true Kona fashion, she ran into her carrier the minute we got home and Roberta showed no hesitation,” Asa said. 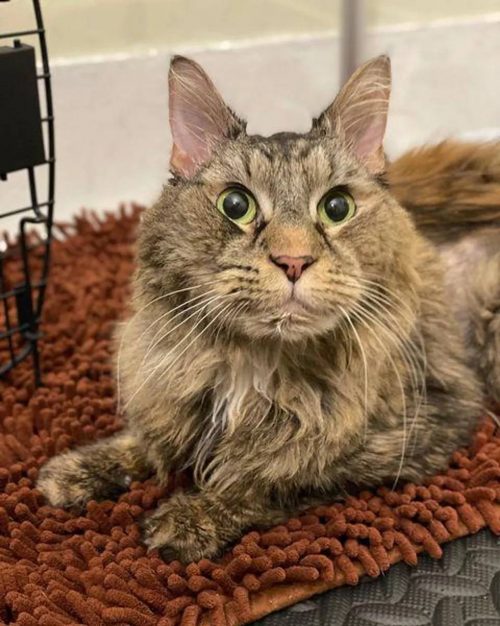 Incredibly, the beautiful kitty was very receptive and fell in love with her canine friend’s displays of affection . Between purring and soft hugs they began a beautiful friendship.

After a long night where she managed to sleep comfortably and feel safe, Roberta woke up with great enthusiasm and a great desire for affection:

“She got a full spa treatment and definitely felt like herself again ! After that, she felt much more confident in general, ”said Asa. 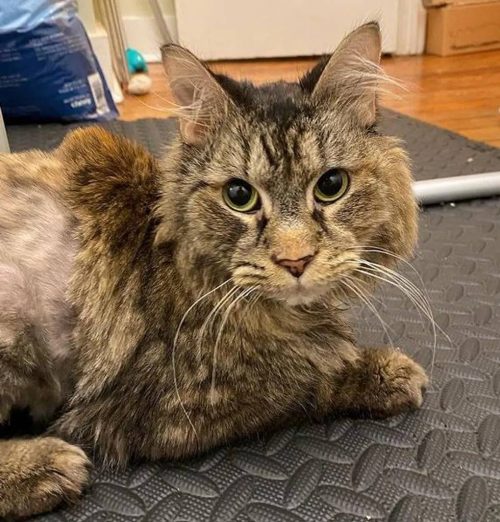 During the kitten’s recovery time, the rest of the furry residents under Asa’s care seemed to understand that her new friend needs a lot of love, so they approached her to offer her their friendship, even taking turns sharing with her . In this regard Asa commented:

“I think it was a joint effort between Kona and the other furballs; everyone has been very welcoming to her, even though she is ‘different’, and I think they have helped her feel comfortable and at home ”. 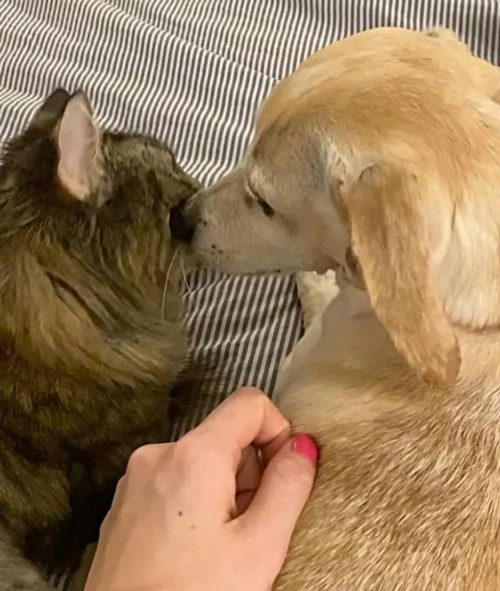 Although all the furry ones have been very kind to the kitten, Roberta has created a special bond with Kona , the dog who received her with sweet kisses from the first day.

The tabby cat loves to spend time snuggled up with her canine friend on the couch. With each passing week, Roberta is stronger, healthier, and more loving than ever.

“We always stop by the welcome room to say ‘good morning’ and Roberta comes out to greet us. She may be underweight, wobbly, and have some health issues, among many other things, but none of this stops her from being the sweetest, most loving, and most trusting kitten ,” Asa said. 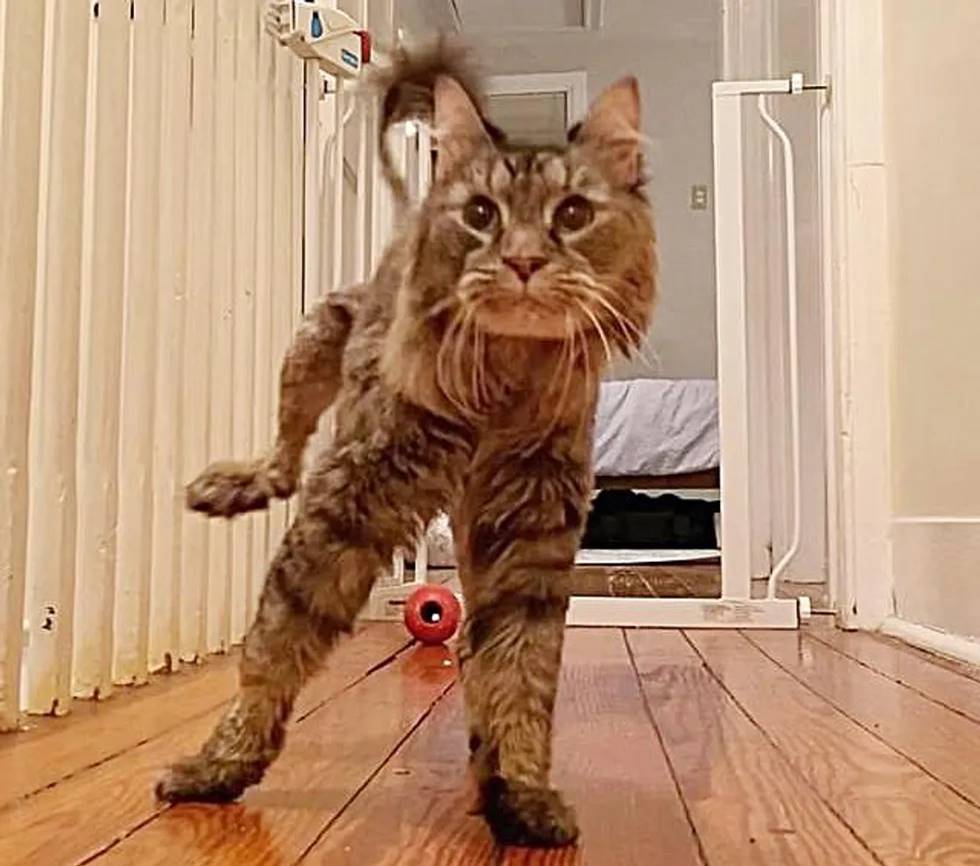 For this kitten , nothing seems more important than enjoying the daily walks at home, for her it is the best way to exercise before resting in the arms of her favorite people or snuggling with her furry friends.

Without a doubt, she is a beautiful kitten that continues to recover by leaps and bounds, the family that adopts her will be lucky to have her.