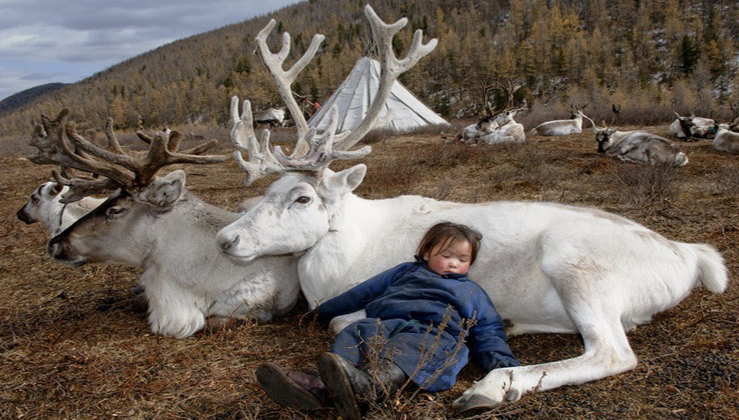 Human civilization has come a long way since the early days of our species. Rising out of caves and undeveloped lands, humans have built cities and homes that the early generations could never have imagined.

The widespread growth of globalization has made it harder for historic cultures to be preserved. This is what makes the Dukha people of Mongolia so fascinating and amazing. The nomadic tribe has lived in the same region for centuries. During that time, they developed a special relationship with the wild animals. In fact, this relationship is so amazing it will leave you in awe. 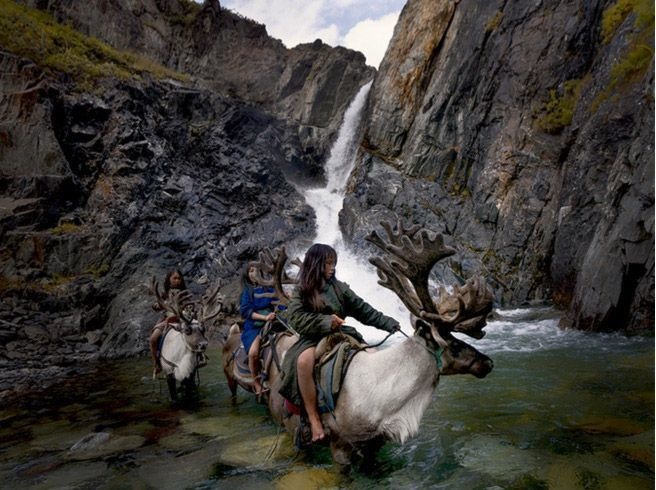 Fortunately for us, photographer Hamid Sardar-Afkhami recently visited this lost tribe and documented what he saw through a series of stunning photographs. Through their unique culture, the Dukha people have developed a unique relationship with neighboring reindeer. They use them as means of transportation over the treacherous terrain they call home. 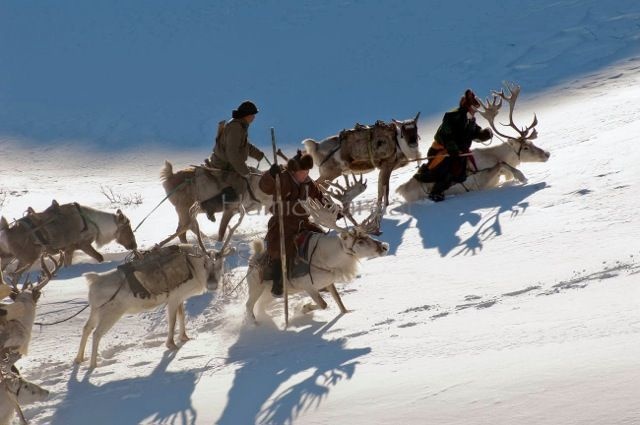 Mongol, member of a Central Asian ethnographic group of closely related tribal peoples who live mainly on the Mongolian Plateau and share a common language and nomadic tradition. Their homeland is now divided into the independent country of Mongolia (Outer Mongolia) and the Inner Mongolia Autonomous Region of China. Owing to wars and migrations, Mongols are found throughout Central Asia. 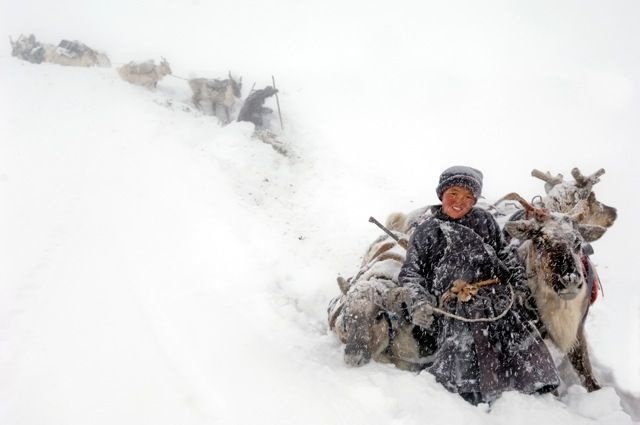 With a few exceptions, the Mongol social structure, economy, culture, and language showed very little change over many centuries. They were basically nomadic pastoralists who were superb horsemen and traveled with their flocks of sheep, goats, cattle, and horses over the immense grasslands of the steppes of Central Asia. 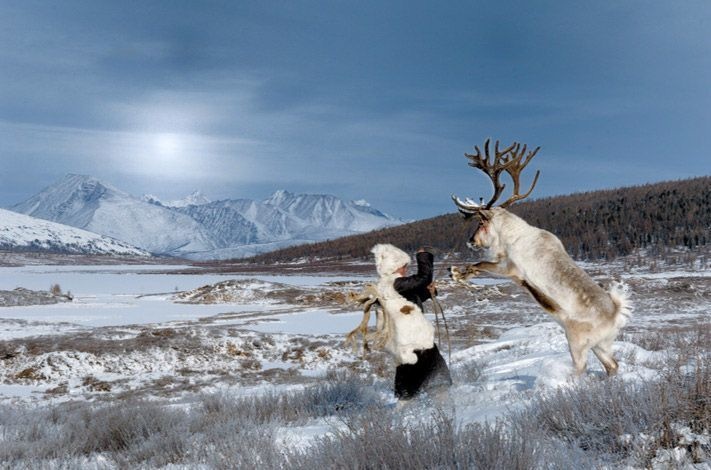 Traditional Mongol society was based on the family, the clan, and the tribe, with clan names derived from those of common male ancestors. As clans merged, the tribal name was taken from that of the strongest clan. In the tribe, weaker clans retained their own headmen and livestock but were subordinate to the strongest clan. In periods of tribal unity, khans (Mongol monarchs) assigned commanders to territories from which troops and revenues were gathered. Mongol history alternated between periods of tribal conflict and tribal consolidation. 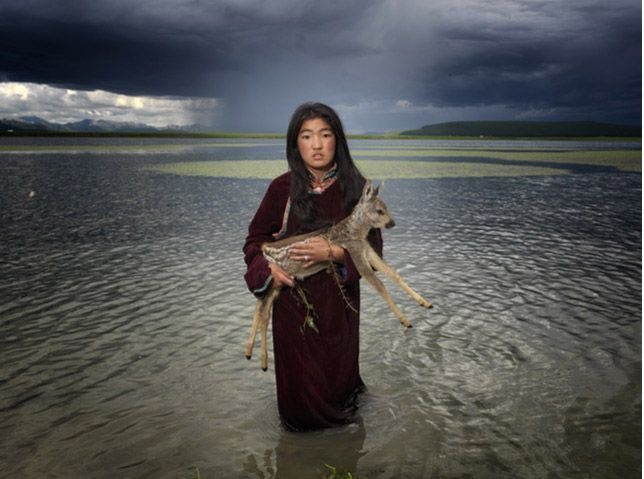 They’re certainly a dying culture,” says Harvard-trained anthropologist Hamid Sardar-Afkhami. Sardar, who spent years living with the Dukha and documenting their way of life, believes there were once around 200 families living in this remote part of Mongolia. Nowadays, he thinks there are probably only 40 families left with about 1,000 reindeer. 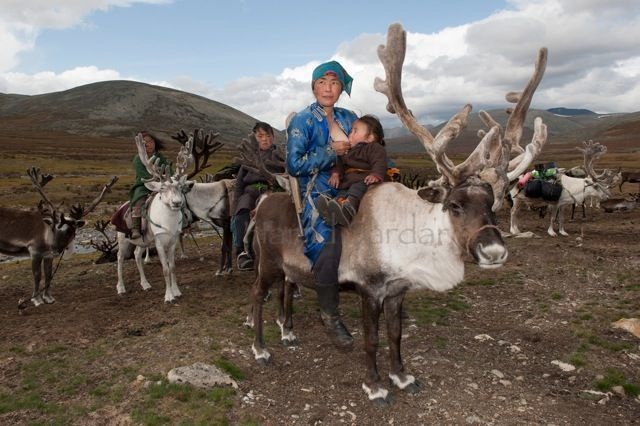 “The number of families has fallen because a lot of them have been synthesized with the mainstream community,” he says. “Many of them have moved to the towns and even to the capital cities.” The biggest threat in Sardar-Afkhami’s view is the defection from the younger Dukha generation, who don’t want to live in the harsh conditions in the taiga (or “snow forest”). “They want to go down and stay in warm cabins in the winter, maybe buy a car and drive,” he says. There’s a big appeal to the modern life. The hardships of the traditional life as a reindeer herder certainly play a factor. “The rise of gold mining in the area, as well as the government’s move to restrict the Tsaatan’s hunting ground, has also hastened the decline. 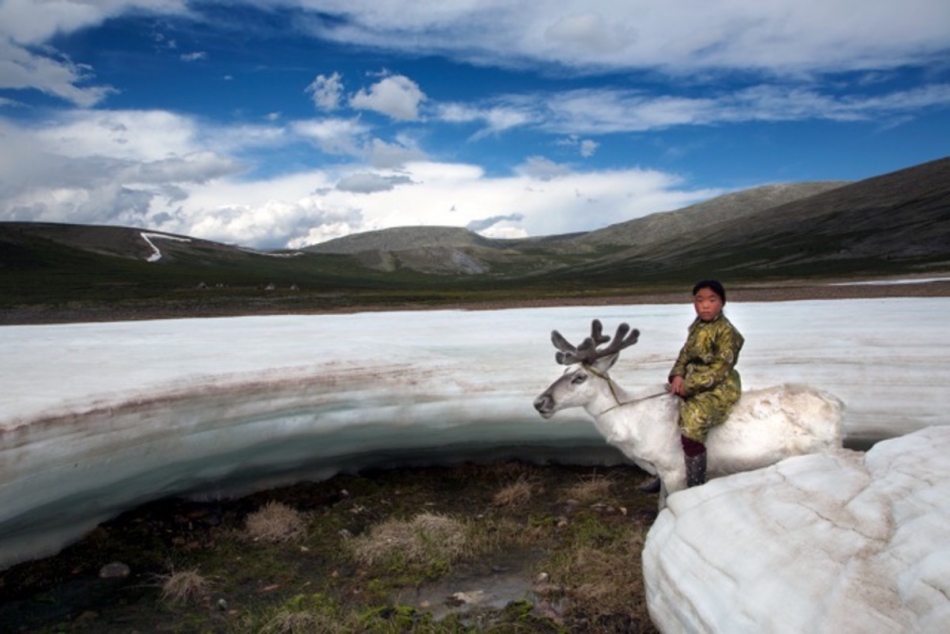 The government declared the Tsaatans’ hunting ground a part of the national protected parks. It’s now off-limits so they can’t hunt anymore, he says. As compensate, according to Sardar-Afkhami, each family was paid about $150. It’s a bit sad because these are traditional hunters and the reindeer need to move. When you pay them off like that, you’re destroying a part of their culture. To further add to the Dukhas’ woes, the number of the reindeer they’re so dependent on has dwindled dramatically due to diseases and lack of available treatment. 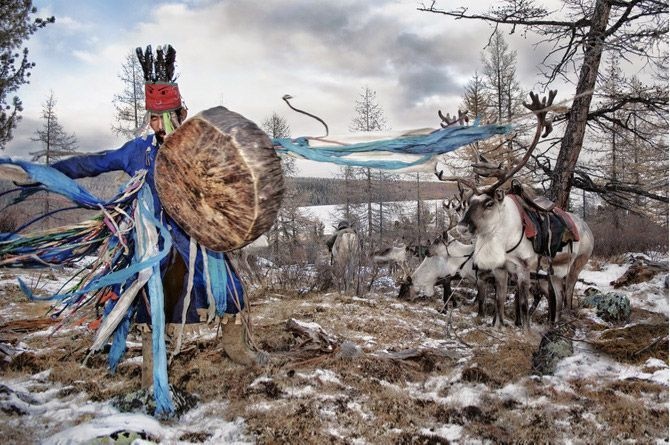 All of these factors have forced some of the Dukha to rely on money from tourism to survive. “Tourism’s a big source of income nowadays,” says Sardar-Afkhami. “They’re making considerable money off tourists.” For some years now, travel companies have been regularly offering options to visit a Dukha community as part of a Mongolian itinerary. 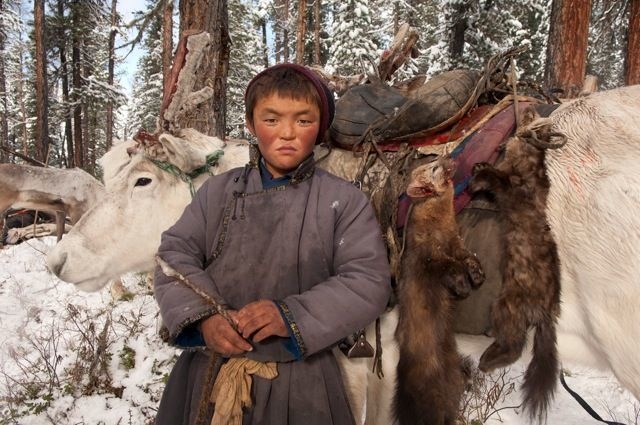 The reindeer, in particular, have proved to be a big hit among visitors who happily pay 5,000 Mongolian Tugrik ($2.50) for a one-off photo opportunity. Judging by the number of buses coming and going, the clan might easily make about $200 a day on average. 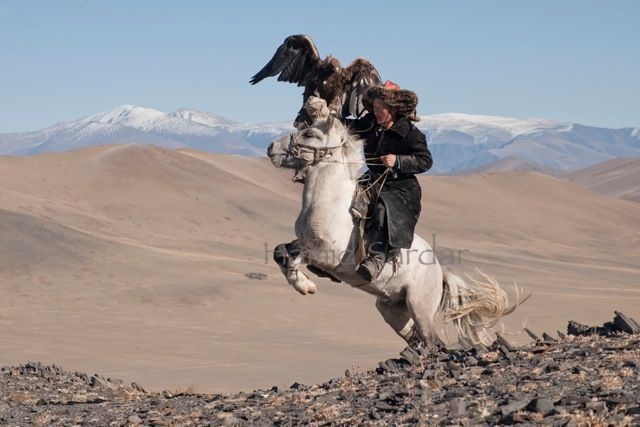 This is a lot of money by Mongolian standards, where the average worker earns an estimated $330 a month. But their efforts have also attracted scrutiny from some travelers concerned about the reindeer being used to lure tourists. So much so that some travel companies, such as Melbourne, Australia-based Intrepid Travel, now discourage visiting the tribe. 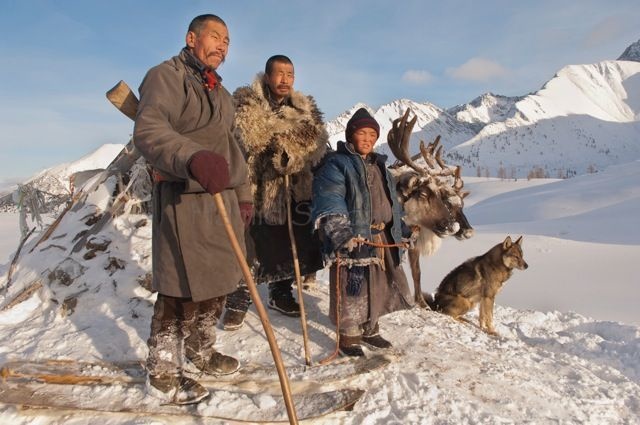 But getting to their remote habitat requires advanced horse-riding skills, as well as days traveling on a bumpy road by car that many visitors aren’t prepared or equipped to undertake. This has prompted a small group of reindeer herders to come down from their traditional area to set up camp near the popular Lake Khovsgol tourist areas. Led by Enkhatuya, who is also the head shaman, a clan of about a dozen relatives offer tourists a glimpse of the Dukha lifestyle without having to travel deep into the larch forest. Enkhatuya admits that life has been getting tougher for her people. “This is the main reason we come down to Lake Khovsgol every summer,” she explains. “We need to earn enough money so that we can survive the winter.” 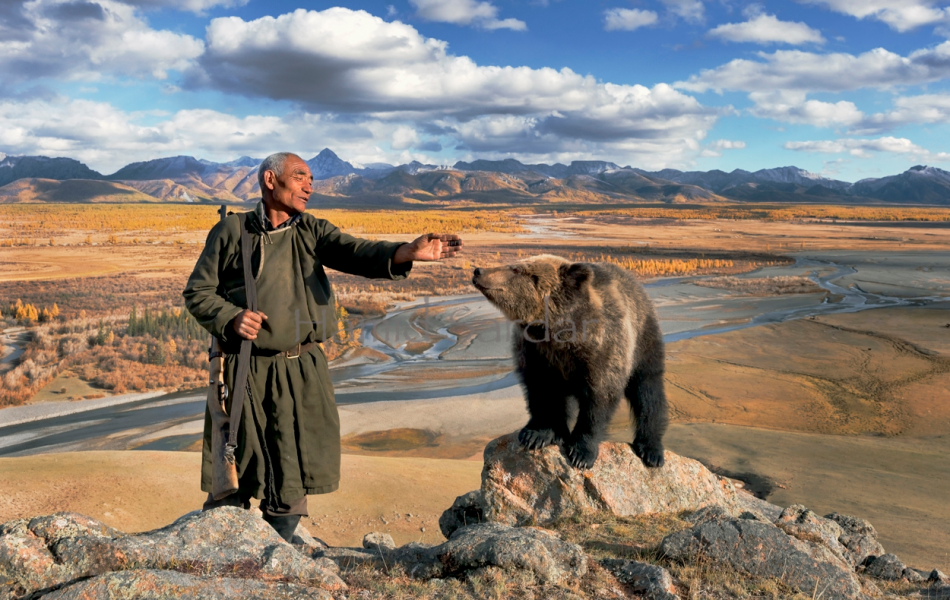 “Many travelers are of the opinion that this area isn’t the best environment for the reindeer as they’re native to much colder climates and are brought to Lake Khovsgol so the herders can benefit from tourism,” says Timur Yadamsuren, local guide and country manager for Intrepid Travel in Mongolia. “For these reasons Intrepid Travel doesn’t recommend this activity.” 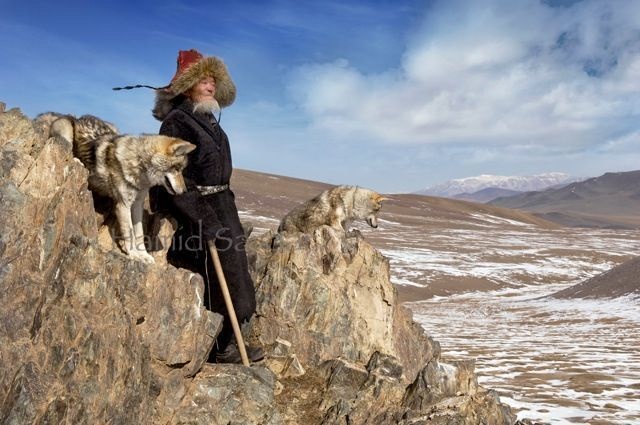 Enkhatuya dismisses the accusations and says, “As a culture we’ve deep connections with our reindeer. They’re like our family. We would never abuse them as such. I can assure you they aren’t suffering. Despite their decreasing population, she believes Dukha culture will continue to flourish. Our young people are returning to continue our ancestral tradition,” she says. “They’re as close to the tribe and culture as they ever were. They’re continuing to speak our native language.” 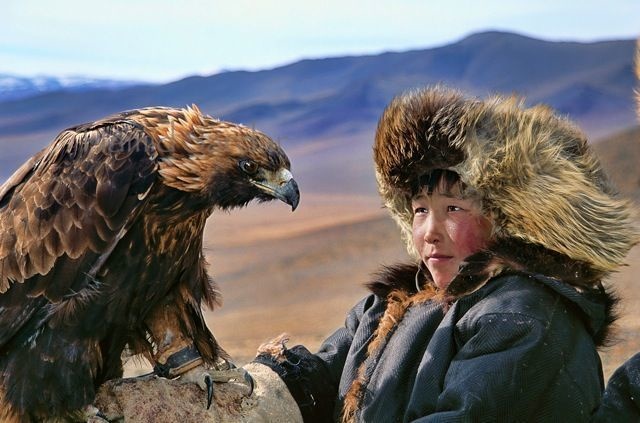 In fact, Enkhatuya’s granddaughter has followed in her footsteps and become a shaman herself. Even so, Sardar-Afkhami believes their ancient way of life is on the path to extinction. They’re the last of their kind,” says Sardar. Even if they survive, if they leave the reindeer herding culture that distinguishes them, their culture will die.