NOT A GREAT SITUATION FOR THE WOODPECKER OR THE WEASEL, BUT IT MADE FOR ONE HECK OF A PHOTO! 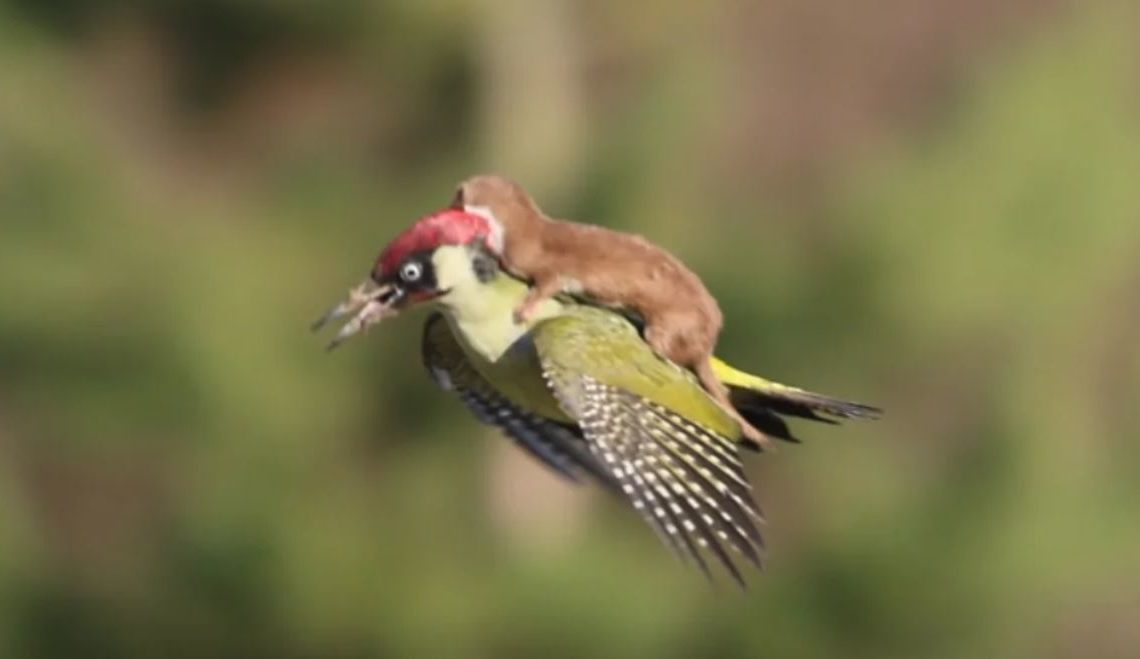 IT GOES WITHOUT SAYING THAT BEING A GOOD BIRD PHOTOGRAPHER ALSO REQUIRES YOU TO BE A PATIENT PHOTOGRAPHER.

There was a time when photography was either a profession or hobby only an exclusive few could participate in. However, now new technology has put exceptional cameras and smartphones in the hand of almost everyone. Needless to say, photography of almost every type has exploded with people turning their own skill to their own work, then posting it on such sites as Facebook, Pinterest, Imgur, and Instagram.

However, there are still some areas of photography that still require a certain amount of skill, and indeed, patience. Take nature photography for instance, in particular birds. Not the easiest of animals to take good shots of, it requires skill that few of us possess

JUST TO PROVE A POINT, TAKE A LOOK AT THIS.

FOR THOSE WHO MAY NOT HAVE HEARD OF HIM, MARTIN LE-MAY IS A PHOTOGRAPHER BASED IN EAST LONDON.

Though Martin Le-May is not exclusively a nature photographer, or for that matter, bird photographer, It certainly seems he just happened to be in the right place at just the right time to capture a truly incredible shot. Out in Hornchurch Country Park one sunny day, he had hoped his wife Ann might see a green woodpecker as she had never seen one before. It was only a few minutes before they both heard some furious squawking and a flash of green.

“I saw that flash of green,” Le-May said, “so hurriedly I pointed the bird out to Ann.”

WHAT THEY SAW NEXT CAN ONLY BE DESCRIBED AS UNUSUAL.

Though it was definitely a woodpecker they were looking at, it looked like it was hopping around in a strange way.

The pair had been looking at it through binoculars and quickly switched over to a camera instead to get a closer look. After that, everything became clear. “Suddenly it was obvious it had a small mammal on its back,” Le-May said. “This was a struggle for life.”

As it turns out, the woodpecker was in the middle of being attacked by a weasel!

Though the situation was terrible for the bird, it made for some truly breathtaking photos.

Le-May had some time to squeeze off a few shots before the woodpecker landed pretty close in front of him.

Fortunately, Le-May and Ann’s presence there helped the little bird out—because the weasel noticed them, too. Apparently, having a couple humans around was enough to scare the weasel into retreating a little bit, saving the bird’s life!

According to Le-May, the bird took that opportunity. “The bird gathered its self-respect and flew up into the trees and away from our sight,” he said.

This was definitely a case of right place, right time for everybody involved!

Needless to say, Le-May’s photos have gone viral on Twitter and have since been covered by many major media outlets.

Though the situation seemed pretty terrible for the woodpecker, it was actually very fortunate that Le-May and his wife had been out walking that day. Though it was fortunate for the bird, it was also fortunate for Le-May himself, who got some truly incredible photos out of it for his portfolio.

Few Of Us Pause To Consider How Intelligent Other Animals Are? At Least Not Until Something Extra-ordinary Happens!

SHARE this incredible story with all your bird-loving friends.