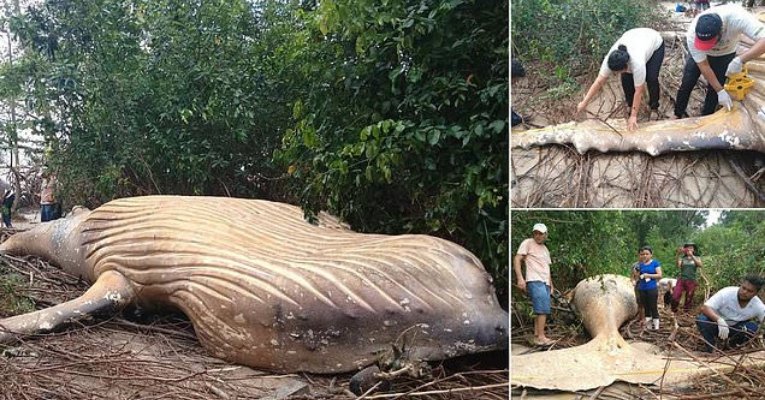 Scientists are baffled by the recent discovery of a 10-ton humpback whale found dead deep in the Amazon jungle of Brazil. The massive whale was found on the island of Marajo, which is located at the mouth of the Amazon River.

Some researchers suggest that the whale was thrown onshore during a storm, but this explanation would take a number of odd circumstances, considering that these types of creatures rarely swim close to the coast. The whale was found so far inland that it would have required hurricane force winds to carry something so heavy for so long. The whale would have had to be picked up very high into the air to be hurled over so many tall trees.

Local officials say that other animals began flocking to the huge carcass of the mammal, which tipped them off that something strange was happening on the island.

Marine specialists that work at the Bicho D’agua Institute, a conservation organization based in Marajo, have been studying the site and the whale to determine what happened.

Renata Emin, lead researcher of the effort, told The Independent:

“We’re still not sure how it landed here, but we’re guessing that the creature was floating close to the shore and the tide, which has been pretty considerable over the past few days, picked it up and threw it inland, into the mangrove. Along with this astonishing feat, we are baffled as to what a humpback whale is doing on the north coast of Brazil during February because this is a very unusual occurrence.”

“Depending on the state of decomposition, some information may already have been lost. We are collecting as much information as we can get and identifying marks and wounds on its body to see if it was caught in a net or hit by a boat,” Emin added.

Emin suspects that despite its size, the whale is merely a calf that likely got separated from its mother during migration. This would explain why the whale was swimming so close to shore in an area where humpbacks are not usually seen.

Researchers remain unsure as to how the animal ended up where it was found and are having trouble determining how exactly it died. They are hoping that studying samples taken from the scene will help answer some of their questions.

According to the State Environment Department, since the whale is so large, it will be left to decompose where it is.

“It’s very difficult to get there and there’s no way we can send a bulldozer because it would not get through. There is no way to remove it. To get there, we need to cross the swamp,” Dirlene Silva of the State Environment Department said.

However, once the animal decomposes, researchers will return to the site to dismantle the whale’s bones so they can be sent to a museum to be reassembled and put on display.