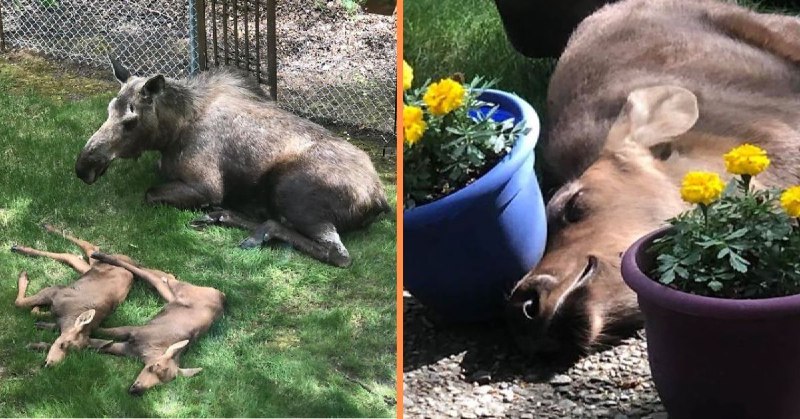 One day, Ryan Ryndstrom from Anchorage, Alaska noticed some uninvited guests in his backyard.

It was a mama moose and her two calves.

Turns out the mama likes the grass so much, they spent the whole day there, and Ryan decided to document it.

The youths ‘taste-tested’ absolutely everything, from the gates to the chairs, once they decided it was all safe, they cuddled up with each other and had a nap.

At one point, their mum even provided the kids with some lunch.

They spent the entire day in his backyard, from around 9am to 7pm.

Thankfully, Ryan documented the entire family trip with photographs and uploaded them on the internet for us all to see!

In an interview with Bored Panda, Ryan spoke about his experience:

“I took the pictures of the moose with Flat Stanley, and took a few without him and went to work. I really expected that the moose would walk away at some point but every time I looked up from my work, they were still there,”

“I could watch directly them from my work spot. It was a great distraction and a fun way to spend the day while I was editing concert footage for my job with the Anchorage Symphony Orchestra.”

“Throughout the day, as the moose changed lounging spots or walked away and came back, I’d go back to the window or the open door (the screen door was still closed), to take more pictures of them. They were oblivious to me most of the time (although their ears were up most of the time, so obviously they were alert).”

“They took two quick trips through the neighborhood, but quickly returned to their spots in our backyard.”

“Most of the time, as you can see from the pictures, they really were just lounging here. A neighbor reported that she’d observed this same moose family running along the road a few miles from our neighborhood earlier that morning.”

“If I’d taken videos early in the morning, you’d have noticed that the mama, in particular, was breathing very heavily. They needed rest, and I think they felt safe to rest here in our backyard.”

“Note the smile on its face as it knocks over this pot. Sociopath.”

“And just like that, the marigold is knocked over and that baby pretends it didn’t have a thing to do with it…”

“The calves spent a lot of time lounging together. It was cute seeing them lying together and moving with the sun throughout the day”

“As the moose family left and returned to the backyard, they’d nibble on plants, or in the case of the calves — the patio furniture and decorations in our’s and our neighbors’ backyard — just like a baby, putting everything in their mouth.”

“In fact, our neighbor started turning her decorative patio lights off and on to try to scare the baby who kept trying to eat a light bulb because she was afraid the glass would break in its mouth.”

“The mama loves eating our yellow begonias and the neighbor’s orange begonias; she also loves the leaves on the trees, the astilbe, bleeding hearts (they’ve bloomed and I’m lucky she didn’t eat them that day), and the orange blossom bush’s leaves.”

“Another cow and her calves came running through the backyard near the end of the day. I could hear them running this way, but I was unable to get a video of them through this lounging moose family. “

“The mama and her babies in my pictures jumped up and quickly ran after them. So there were two cows with four calves running through the backyards. It was a lot of action that I was just relaying to one of my friends over the phone.”