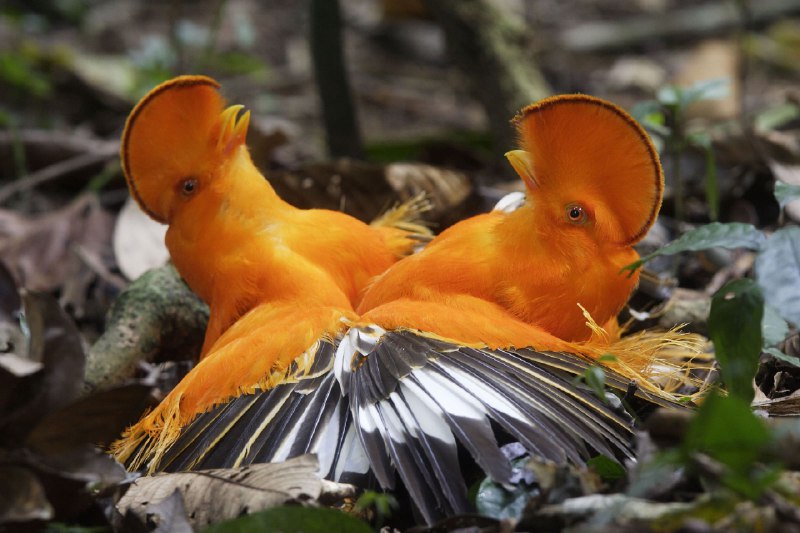 Bright orange is always eye-catching. When it appears on a bird’s plumage, it surely makes the bird stand out from the crowd. The gorgeous coat is unmistakable, in sunlight and darkness. The Guianan cock-of-the-rock was luckily born with that captivating plumage. Most of its body is covered with bright orange, except for some black and white feathers on the wings and tail. Its crest is also an orange color. But noticeably has a half-moon shape with a dark line on the edge. This spectacular feature makes name for this bird. Like many other species, the female Guianan cock-of-the-rock is a bit duller than the male with a dark shade of brown and grey, and a smaller crest. She also has a yellow-tipped black bill that is different from the orange bill and legs of the male. This strikingly beautiful bird is a species of cotinga, a passerine bird endemic to South America. They distribute in ancient mountains east of the Andes and north of the Amazon River, in the Guianas, and neighboring countries of Venezuela, Brazil, and Colombia. Thanks to large habitats, the population of this bird are very stable.

They prefer living in humid forests near rocky outcrops and feed on fruit and berries. But these birds are sometimes seen eating insects. When the breeding season begins, male Guianan cock-of-the-rock birds attract females with communal lek. After finding mates, the female builds the nest on her own. This nest is placed under a rocky overhang plastered to the rock with mud. She then lays 1-2 eggs in the nest and incubates them for about 28 days. She continues to feed the chicks until fully fledged. If you love this gorgeous bird, just share the article with your family and friends.