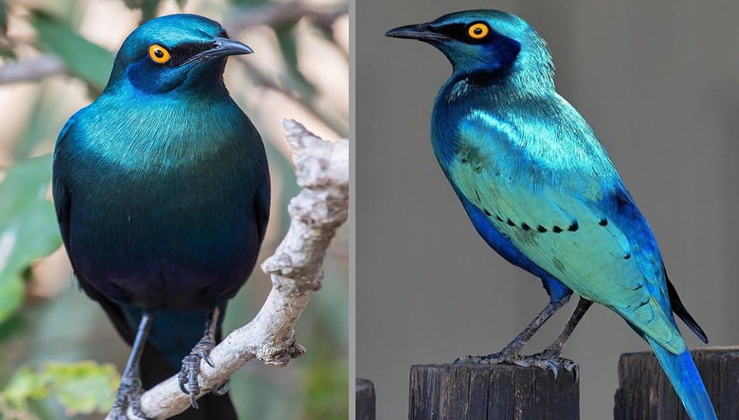 This species is widely distributed in sub-Saharan Africa, from southern Mauritania and Senegal to Ethiopia and south through eastern Africa to north-eastern South Africa and Angola. They are absent from the rainforests along the Gulf of Guinea and the congo river basin.

Common within its range but uncommonly striking to birders who are unfamiliar with just how colorful starlings can be, the greater blue-eared starling is a magnificent bird with spectacular plumage that has to be seen to be believed. One of the most colorful members of the Sturnidae family, there are many different greater blue-eared starling facts that can be a surprise to birders.

These starlings are easy to recognize. First, their upright posture, stout bill, and short tail help define their jizz in the starling family, and their bright colors are key identification features. Genders are similar with teal-blue upperparts that show a brilliant shiny, metallic iridescence in good light. A blue-black, mask-like facial patch surrounds the eyes and extends over the auriculars. Evenly spaced, relatively uniform black spots create two wing bars. The underparts are more deeply colored and the abdomen and flanks are blue-purple. This bird’s plumage may show different hues or degrees of coloration depending on the viewing angle and quality of light. The eyes are bright yellow or yellow-orange with a dark pupil, and the legs and feet are gray-black.

Juvenile birds are similar to adults but are much less iridescent, and show sooty brown-gray underparts. The eye is also darker and the pupil may not stand out as easily. These noisy starlings have a number of jumbled songs and calls that include musical warbles, grating croaks, nasal mews, and a variety of whistled notes. Call notes are usually shorter and more abrupt but can have just as many variations.

These starlings are adaptable to a wide range of habitats and may be found in open deciduous woodlands, riparian areas, drier savannahs, and around human habitation in towns and villages. They are found year-round in sub-Saharan Africa from Senegal and southern Mauritania west to eastern Eritrea and Ethiopia. Their range extends south to Mozambique and Botswana, then east again to northern Namibia and southern Angola.

After the breeding season, a small portion of the northwestern part of this bird’s range expands south, especially in Burkina Faso, Ghana, Togo, Benin, Nigeria, and northern Cameroon. This is the only migratory part of the greater blue-eared starling’s population. These are gregarious birds that can gather in very large flocks and roosts, often mixed with several other starling species, which can make identification trickier. With their loud voices and range of calls in their vocal repertoire, the larger flocks can be very noisy.

Greater blue-eared starlings are omnivorous birds that will take advantage of any available food source. Insects, seeds, berries, fruit, small mammals, and small reptiles all make up part of their diet, and they may sample many other foods as well. These birds will forage either in trees or on the ground, and typically prefer to walk rather than hop when foraging. They will even land directly on grazing animals to pick away at insects and parasites.

These starlings are cavity-nesting birds that use natural cavities or the old nesting holes of woodpeckers or barbets. Some greater blue-eared starlings have even been observed nesting in large gaps in the broad stick nests of ibises and storks. Both males and females work together to line the nesting cavity with dry grass, feathers, and similar nesting material.

The eggs are green-blue with darker brown or purple dots, and there are 2-5 eggs in each brood. The female parent incubates the eggs for 13-14 days, and after the altricial young hatch, both parents will bring the chicks food for an additional 22-24 days. At that time, the young starlings are ready to leave the nest but will follow their parents to learn the best foraging spots and food types.

Multiple broods are likely with these starlings, though their breeding behavior and reproduction success have not been extensively studied. They are occasional victims of brood parasitism by great spotted cuckoos and, to a lesser extent, greater honeyguides. Despite these potential nesting threats, however, the brood parasites do not have a dramatic impact on the starlings’ populations. These birds are not considered threatened or endangered, and in fact, the growing presence of agricultural livestock is helping expand their range and populations. Because they feed easily on insects from grazing livestock, these birds will readily follow livestock herds to new areas.

How to Find This Bird? Because greater blue-eared starlings are so abundant and not deterred by human presence, they can be very easy to find if birders visit their range. Watch for the birds foraging, particularly near livestock or grazing animals, and note their bright colors for easy identification.