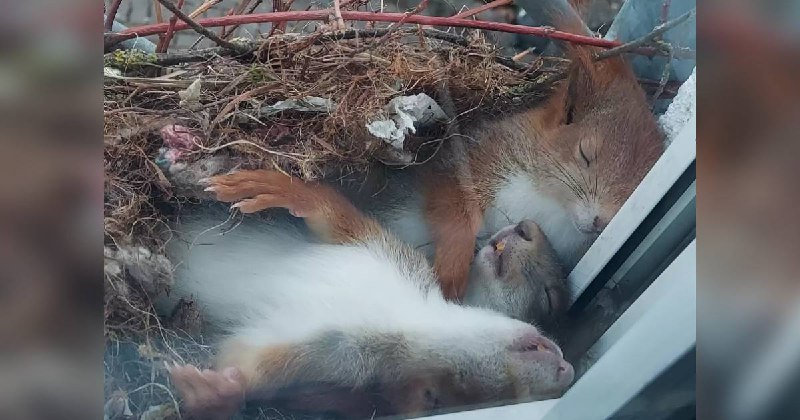 Ludwig C. Timm spotted some activity at his residence in Germany a few months ago. It turned out that a small building project was taking place directly outside his bathroom window.

“At first, we spotted simply a few little twigs on the windowsill. We assumed it had been blown there by the wind,” Timm told The Dodo. “Then we noticed the squirrels were constructing.”

The squirrels had picked this location to construct their nest – and to begin their family.

Timm, a photographer, saw the unexpected arrival as a once-in-a-lifetime opportunity to picture squirrels up close – even more so when the squirrel family grew.

Of course, the nest was more than a place to sleep. It was also a nursery.

For months, Timm has been keeping a careful eye on the squirrels and their ever-growing babies just outside his window. However, one image jumps out among the pictures of their regular life.

While checking on the nest the other day, Timm noticed that the squirrels were cozied up and taking a nap:

“It was incredibly fortunate for me to be able to photograph the sleeping squirrels,” Timm stated. “Normally, they sleep within the nest, but because it was hot that day, they slept where I could see them.”

A few sleeping squirrels may appear to be a simple scene. However, witnessing it firsthand is priceless.

It all started with a few twigs outside Timm’s window.

“It’s a very beautiful coincidence [that they chose that location],” Timm commented. “We were able to watch the squirrels grow up.”