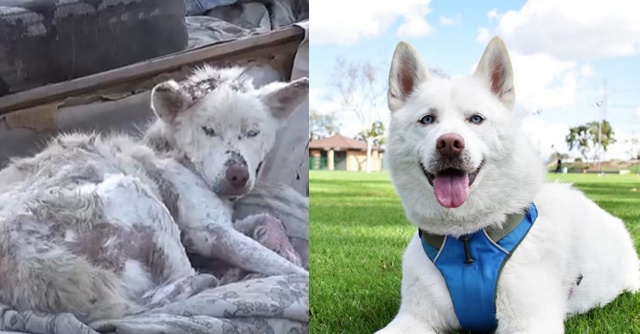 In this  Educational Pet article you will  learn about the story of Miley, a stray dog ​​who was rescued by the  Hope For Paws association . The rescued dog had serious skin problems, infections and malnutrition. The video produced by the association shows how lovingly and patience the dog has been able to get ahead.

Miley is just one example of how thousands of stray dogs live day by day, and that with a simple gesture of humanity the life of a living being can be changed.

Dog who lived in a garbage heap for months has made an amazing recovery.

The  Hope For Paws organization  gives all its time and financial resources to save the lives of stray animals. As is the case with Miley, who was so sick that she had no choice but to live in the rubble of garbage, she lived there for months, unable to eat and with no one to treat her wounds.

One person saw the dog up close and immediately called Hope For Paws. When the rescuers arrived, she was seen without strength, it seemed that she only had several days to live.

The Siberian Husky breed dog was thrown in the garbage for several months trying to survive on her own. She never tried to hide or run away from the rescuers, she just stopped and got some food, which she then took to the Foundation.

Once inside, Miley was treated urgently by veterinary doctors. Treatment consisted of healing baths and medication for her skin wounds.

Weeks after being rescued, Miley made a new friend named “Frankie” a small dog pulled from a sewer pipe.

Miley made a full recovery and many people wanted to adopt her after hearing her story on Facebook as it went viral. Thanks to this, Tony Bua entered her life. The story of this woman was as surprising and emotional as that of Miley, since she had suffered from breast cancer, and after many years of fighting she was finally able to beat it.

Tony and Miley had a great bond since they met; they became inseparable, and the woman even created a Facebook page to spread the news about Miley to her followers.

Unfortunately, three years after Miley’s adoption, breast cancer returned, and this time Tony couldn’t get over it. He died and the dog needed a home again.

Many people have offered to adopt her, but Miley is currently in foster care, as the foundation must ensure that she chooses a new home that suits her, since her life has not been easy and they are not going to leave her anywhere. place.

Fortunately, the life of suffering for this pet is in the past since Miley was able to find the eternal home she was looking for, where she is surrounded by love and very happy in the company of a family that adores her and considers her as one more member of the family.