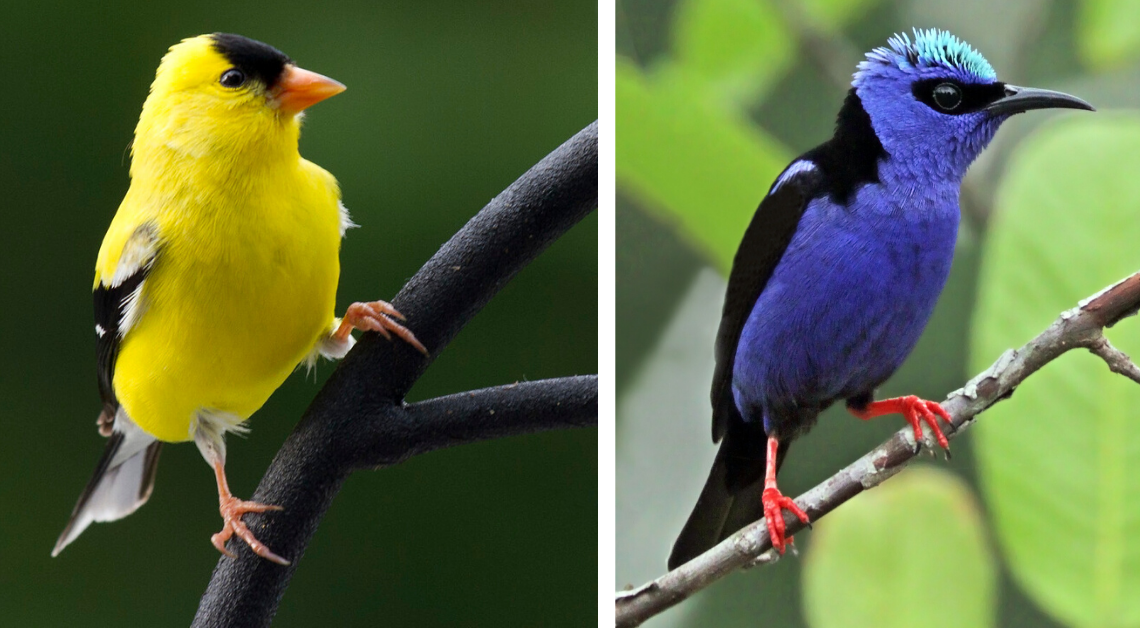 HERE YOU WILL FIND ALL THE BEAUTIFUL BIRDS POSTED ON ONEBIGBIRDCAGE.COM UP TO THE WEEK ENDING 03/28/2020.

Each hey up there 8 photo comes with a short description of the bird. We hope you will read, look, listen and above all, please enjoy.

The American goldfinch (Spinus tristis) is a small bird in the finch family of birds. Also migratory, it can be found ranging between Alberta, Canada to North CAroline during its breed season. It can also be found just to the south of Canada and the United States border all the way to Mexico during wintertime.

The red-legged honeycreeper (Cyanerpes cyaneus) is a small species of songbird in the tanager family (Thraupidae) of birds. It is widely found in the tropical New World from southern Mexico all the way south to Peru and Bolivia. It is also found in central Brazil, Trinidad and Tobago where it was probably introduced.

Both males and females resemble the respective genders of the much smaller yellow-hooded blackbird of South America.

The squirrel cuckoo (Piaya cayana) is a large and active species of cuckoo found in wooded habitats from northwestern Mexico to northern Argentina and Uruguay, and on Trinidad.

The red-billed leiothrix (Leiothrix lutea) is a member of the family Leiothrichidae and is native to the Himalayan region.

The blue-grey gnatcatcher (Polioptila caerulea) is a very small songbird only 10-13 cm (3.9-5.1 in) in total length. Their breeding habitat is usually open deciduous woods and shrublands found in southern Ontario and the east and the southwestern United States. They are also found in Mexico.x

The long-tailed broadbill (Psarisomus dalhousiae) is found in the Himalayan region in a range extending from Northeastern India all the way to Southeast Asia.

The blue whistling thrush (Myophonus caeruleus) is a whistling thrush found in a range that extends from Central Asia, China, right to Southeast Asia. It is commonly known for it’s quite loud human-like whistling song at dawn and at dusk.

The Taiwan rosefinch (Carpodacus formosanus) is a finch species in the Fringillidae family. It was once thought to be a subspecies of the vinaceous rosefinch. Native to Taiwan it prefers temperate forests and subtropical or tropical dry forests.

The Taiwan rosefinch (Carpodacus formosanus) is a bird species in the Leiothrichidae family. It prefers feeding on insects and berries and can be found in northern parts of the Indian subcontinent from India and Nepal to Bhutan.

The turquoise-browed motmot (Eumomota superciliosa) is also commonly known as the Torogoz. It is a colourful medium-sized bird in the motor family, Momtidae. Its range extends from southeast Mexico to Costa Rica.

The Araripe manakin (Antilophia bokermanni) is a critically endangered bird in the manakin family (Pipridae). It was only discovered as recently as 1996.

The golden-browed chlorophonia (Chlorophonia callophrys) is a species of bird found in the Fringillidae family. It is found in Costa Rica and also in Panama.

The silver-eared mesia (Leiothrix argentauris) is a species of bird found throughout South East Asia.

The great jacamar (Jacamerops aureus) is a bird species in the Galbulidae family. It prefers subropical and tropical moist lowland forest in through most of central and south America.

Not only polite, but they are also very beautiful. All the colors of the rainbow.

The Moment A Bird Stands Perfectly Still, Blending In, She Baffles Would Be Predators! Can You Spot The Bird?

Please SHARE these amazing photos with all your bird-loving friends and family.