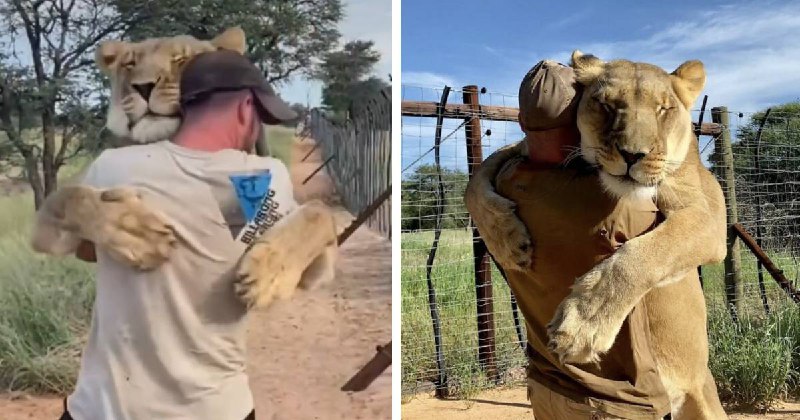 It’s been 10 years now, but this incredibly fortunate man still gets to wake up every morning and cuddle up to his enormous furry friend: a lioness who was saved by him when she was just a few days old. These two have been together ever since, demonstrating that love is a universal language understood by all, including animals.

Valentin Gruener, a conservationist, recently released a video of his morning encounter with a lioness that he captured and uploaded to YouTube. Because of the touching footage, it’s no surprise that it became viral on the internet.

“Sirga thinks of me as a best friend. She loves to give me a big hug,” Gruener said. “She does rub her head on mine a lot, just like a domestic cat. Sirga has never been aggressive towards me but I have a huge respect for what she is. I am sure she is aware that I am very different.”

The first time Gruener and Sirga met was in 2012, and the circumstances were less than ideal. Gruener discovered the now-mighty lioness just a few days after she was born. She was born in a rehabilitation center, but her mother quickly rejected her, and she was the only one to live. Her first stop was at the Modisa Animals Project, which Gruener co-founded in Botswana for the conservation of wildlife. It was there that they first formed a strong bond of friendship.

“For such a huge cat, Sirga is surprisingly friendly. She usually gives me a big hug when I visit her, “Grueser added. To put it another way, “She has a very friendly and gentle personality for a lion.”

Please share this video with your friends and family.