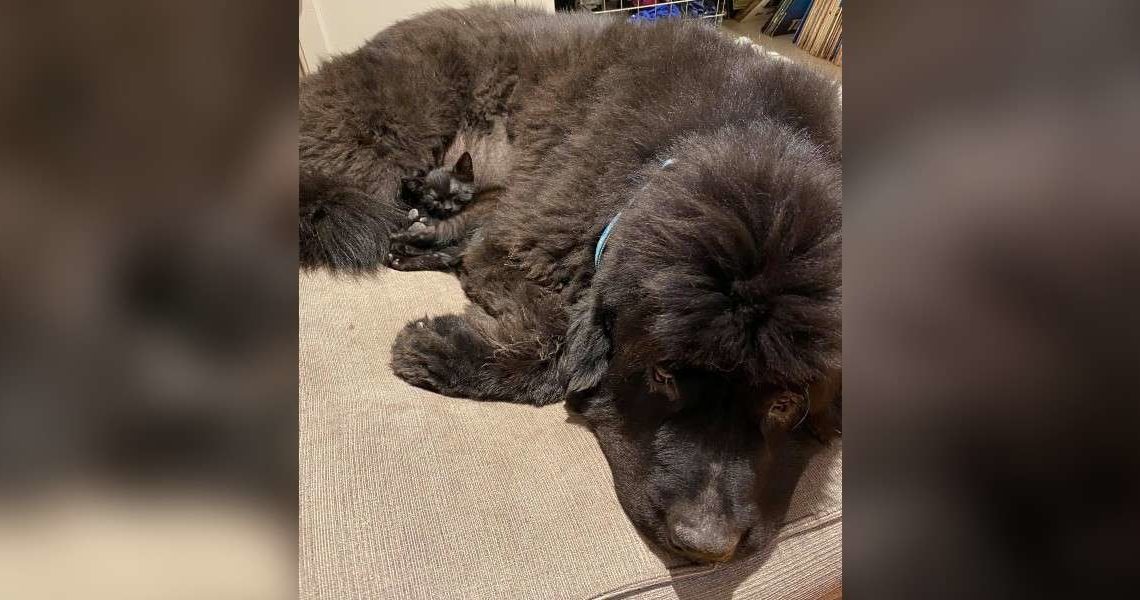 Basil and his siblings were found all alone on the streets of San Jose, California, a little over a month ago. They were taken in by Humane Society Silicon Valley and quickly placed in a foster home. All three kittens were very underweight and struggled to eat at first, but with the help of their rescuers they grew stronger every day, and now they’re absolutely thriving.

“Basil is the most outgoing and adventurous of his siblings,” Alexandra Baggs, content marketing manager for Humane Society Silicon Valley, told The Dodo. “His foster mom describes him as ‘a bit of a wild child.’”

As soon as Basil and his siblings were healthy enough, they finally got to meet their dog foster brother, Angus. Angus has always loved helping to foster kittens, and was excited to meet the new ones. Basil’s siblings were a little shy around Angus at first — but not Basil.

“He walked right up, touched Angus’ face with his paw, and jumped around on his dog bed,” Baggs said. “After a few minutes of playing, he snuggled right up to Angus and that’s been his pattern ever since. He was immediately sure that snuggling against Angus’ side was a safe place for him and never seemed to have any doubt.”

Now, Angus and Basil hang out all the time, always supervised by their foster family, of course. The pair love each other so much, and if they’re not having fun playing, they’re snuggled up together taking a nap.

One day, Basil was napping while snuggled up against Angus and was almost camouflaged against him — so much so that his foster mom didn’t even notice him there at first.

“His foster family knew Basil was hanging out with Angus, but when she glanced over a minute later, she didn’t immediately see him,” Baggs said. “She thought, ‘I know he was just there — where did he go?’”

“Once her eyes focused and found him, she laughed and grabbed her phone to get a photo,” Baggs said. “She knew they got along well, but until that moment, she hadn’t realized what an exact match they were, like camouflage.”

After everything he went through, Basil feels safe when he’s snuggled up against Angus. His dog foster brother is definitely helping to make him more confident and giving him all the skills he’ll need to go off and thrive in his new forever home.