Dog Walks Miles Every Day To Visit His Owner’s Grave

Definitely the best friend we can have is a dog, they are so loyal and even until death they will always accompany us. The love that a dog feels for his owner goes beyond what we can imagine , that bond that is formed from the first moment they meet is almost impossible to break.

This is the story of a little dog who travels miles to visit his human father’s grave every day. This loyal dog is called Fulmine and for more than 7 years he was the happiest to share his life with his best friend Leonardo.   The two of them lived very happily and comfortably in the beautiful countryside of Italy, enjoying the nature that surrounded them.

Leonardo ‘s daughter named Sarah Sechi commented that Fulmine and her father were totally inseparable, and could even claim that they had become soul mates.

“They were very affectionate,” Sechi commented. “They were always together and hugged”

Since Fulmine was two months old and adopted by his owner, they immediately formed a beautiful bond. Leonardo sick and spent several days in the hospital, in those days Fulmine was very sad for the absence of his owner.

“Every time a car approached, Fulmine would run to the door to see if it was my father .comment your family

Unfortunately, the time they shared together came to an end, Leonardo lost the battle of his terrible illness and Fulmine was very sad, even so, he did not lose hope and looked for him all the time.

One day after Leonardo’s funeral, his family went to the cemetery to leave flowers on his grave. When they arrived they got an incredible surprise. Fulmine was already there! He had already found the place where his owner was buried

“I didn’t expect to find it there. She had not been to the funeral. I have no idea how she knew where to go , ”added the young woman. 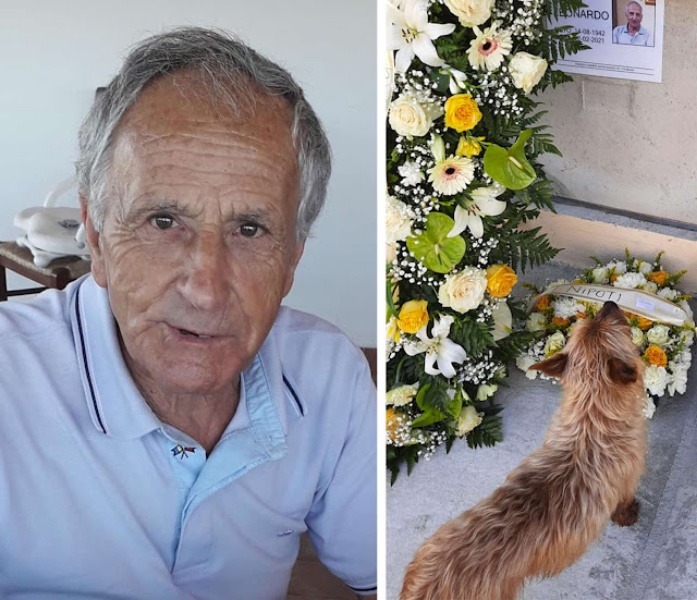 Sara and her son could not believe that Fulmine traveled more than 3 kilometers from his house to the cemetery, since he had never been to that place.

“I like to think that Fulmine is connected to the love he feels for my father, or maybe it is the one that guides him there, it is one of the things that surprises me the most”

In the following days, some neighbors reported seeing Fulmine walking to and from the cemetery. To this day he continues to visit his friend, and we are sure that the love they have will last until the end of his days.