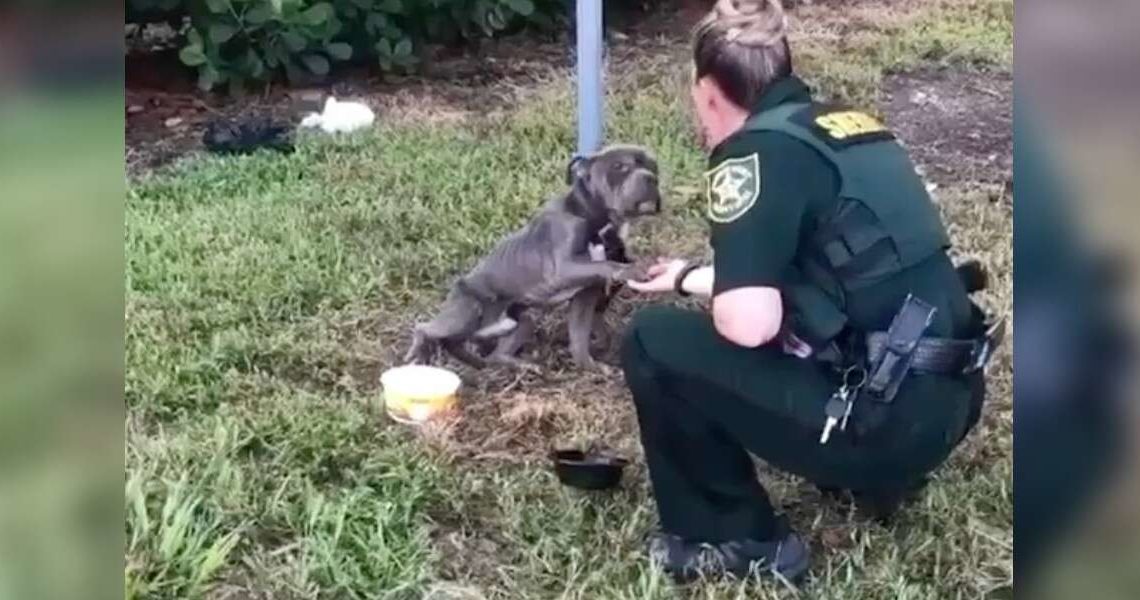 With no cameras in the area, it was impossible to know how long the dogs had been there or who’d abandoned them. But with temperatures climbing to 100 degrees outside, Officer Laurella knew there was no time to waste.

She rushed over to find a frail gray dog tied so tightly to a pole that he could barely move.

“He was tied to a pole with a very short leash,” Amy Roman, president and founder of 100+ Abandoned Dogs of Everglades Florida, told The Dodo. “He was absolutely emaciated, dehydrated, with every bone and rib protruding.”

The dog, now named Liam, placed his paw in the officer’s hand and bowed his head to receive pets. “She just walked toward him very slowly and reached out her hand, and he kind of cowered and gave her his paw, as if to say, ‘Please help get me out of here,’” Roman said.

You can watch the rescue here:

Officer Laurella could see that Liam hadn’t had an easy life and needed special care, so she reached out to the rescue 100+ Abandoned Dogs of Everglades Florida for help. Even though the rescue was over capacity, Roman accepted Liam without hesitation.

After numerous vet visits, Liam is now relaxing in Roman’s home, where the 17-pound pocket bully is slowly gaining back his strength — and eating better than he ever has before.

“He’s receiving so much love around the clock,” Roman said. “He’s being fed every hour on the hour so his body gets used to it … We have volunteers who are cooking batches of boiled chicken and rice, so he’s loving life right now.”

While Liam still has a long road ahead of him, with many vet appointments in his future, he’s been a ray of sunshine since his rescue.

“He loves everybody, and there’s not a mean bone in this dog’s body,” Roman said. “To me, that says it all, because after everything he’s endured, he’s still so grateful and forgiving.”

Liam is one of many animals who’ve been recently abandoned or surrendered by their owners in Florida.

With so many shelters bursting at the seams, Roman hopes pet owners will reach out to shelters and rescues for help and resources before deciding they can no longer care for their pets. And Liam is proof that every dog deserves a second chance.

Despite everything he’s been through, Liam is still offering people his paw, proving that he’s ready for a life with a loving family.

“I think humanity can definitely learn a thing or two from dogs such as Liam,” Roman said. “It just restores your faith.”