Dog Refuses To Leave Trapped Friend’s Side Until Help Arrives 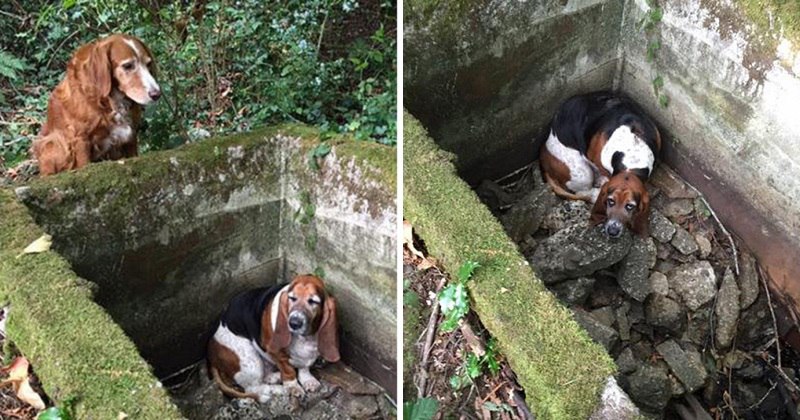 Dogs are known for being loyal and smart, and this is proved in many stories. And for people who still have any doubts regarding their loyalty, the tale of love between two pets below will prove, once again how awesome dogs are.

Tillie the Irish setter-spaniel mix and Phoebe the basset hound had been out for a walk together on Vashon Island, Washington. Unfortunately, they went missing and didn’t return. Their owner contacted Vashon Island Pet Protectors to ask for help. VIPP volunteers prefaced the following dog rescue with a lost dog notice on Facebook. After a week of searching, they received a call from a person who noticed a reddish dog on his property. He told that “for the past few days a ‘reddish’ dog had been coming up to them when they were out on their property and then promptly heading back into a ravine.” The volunteers decided to go check it out with the hope that they could find the two dogs.

Fortunately, the team found the two animals. Phobe got trapped into a cistern deep in a remote ravine and was able to get out. However, Tillie refused to leave her side, until humans came to rescue her. They quickly discovered that Tillie tried to find some helps during all that time. “When I got there and looked down, Tillie saw me but didn’t come running up,” Carey, one of the volunteers said. “She just stayed near the edge of this cistern, pressed with her head as close as she could get. Had she run up, we might have never realized that Phoebe was down there. She just stayed put, making it so clear that I had to come to her so I would see her friend.” Despite missing for a week, the dogs were both in good health. They were reunited with their owner who couldn’t hide her happiness when saw them!

Tillie’s loyalty and compassion for her friend melted everyone’s heart. It is just so touching. Do you agree with us? Let us know your thoughts in the comment