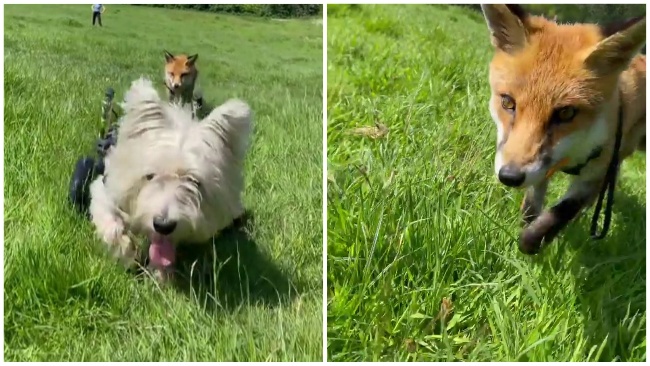 The love of animals simply has no limits , this beautiful story that we will read next shows us the great gesture of love and generosity that animals have.

It all started when a small West Highland dog named Jack had a terrible tumor on his spine that prevented him from walking on his own. And on the other hand, a little fox who was named Pumpkin and who was found with both her legs broken, with almost no hope of life.

The heroine of this story is called Ana Lapaz-Mendez , a veterinarian from London who, despite the serious problems they had, did everything possible to help them survive and have a better life.

When the veterinarian Ana Lapaz-Mendez heard about her case, she did not hesitate to treat the two animals medically, this prevented them from being euthanized. Pumpkin the little fox arrived first and although her health was very complicated, since in addition to the fractures in her two legs she suffered from blindness , the doctor Ana managed to heal her wounds.

Later, Jack arrived and began a proper treatment for his tumor. Although it didn’t work at all, because he was still having trouble walking, they decided to give Jack a special wheelchair.

When the two animals were in their recovery process, no one expected that they would form a unique connection . From that moment they became best friends, and despite the disabilities they both have, they help each other. 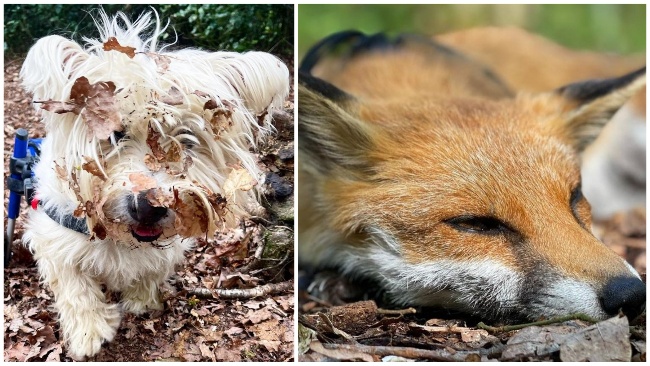 Ana shared some beautiful photographs where we can see how the two animals walk happily in nature. The curious thing is that the little fox, Pumpkin, follows her best friend Jack, recognizing only the sound of his wheelchair. Apparently she learned very well to differentiate the sound of the wheels and follows him everywhere, for her part the puppy enjoys the company a lot, because even if Pumpkin stays behind, he waits for her.

“These just melt my heart when we go for a walk, Pumpkin the vixen follows Jack the most, maybe because it’s easier to recognize the sound of the wheels . ” Ana commented on her Instagram From her.

Ana has also commented on the beautiful relationship that both animals have forged, since despite not being the same species, Jack takes care of other dogs and cats and is always there to help her.

In the following video we can see how Pumpkin follows Jack on a walk in nature.