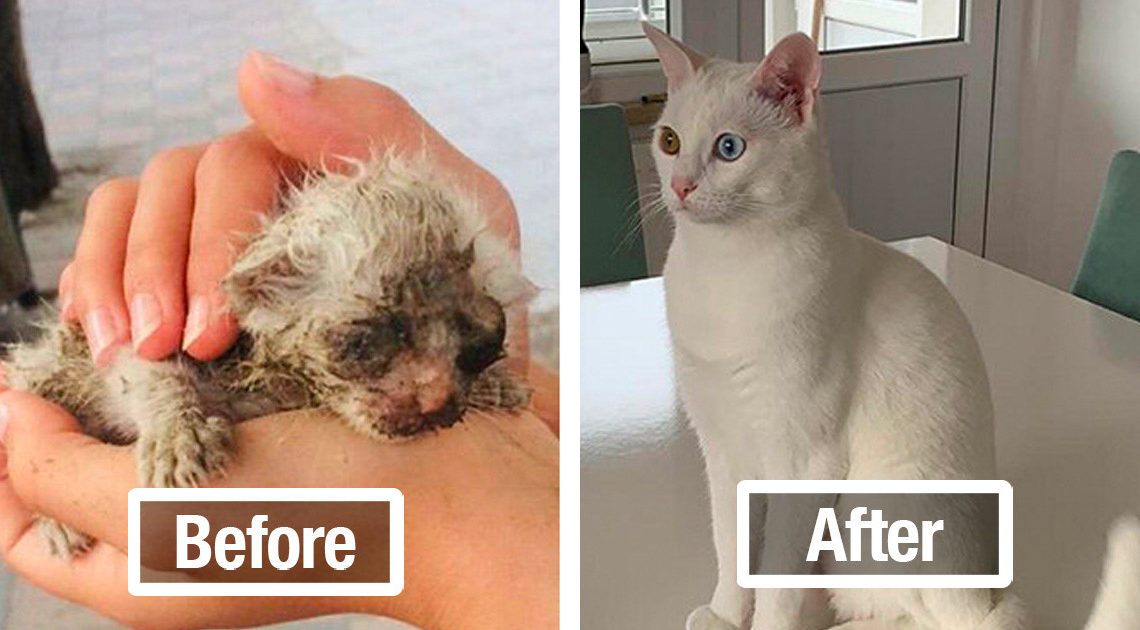 That’s something these suffering cats deserve so much. All suffering animals deserve love, these cats included.

Most of these cats have been through a lot – they’ve suffered cruelty, neglect, and abandonment. One of the places that honor cats getting their new homes is the subreddit r/BeforeNAfterAdoption.

There, owners share their emotional stories and photos of their new kitty family members. Before-and-after-adoption photos are some of the best proof of how love and care can transform a poor, hurting animal into a majestic and proud kitty cat.

1. “Its Been A Year” for this small kitten, now a stunning and gorgeous cat. 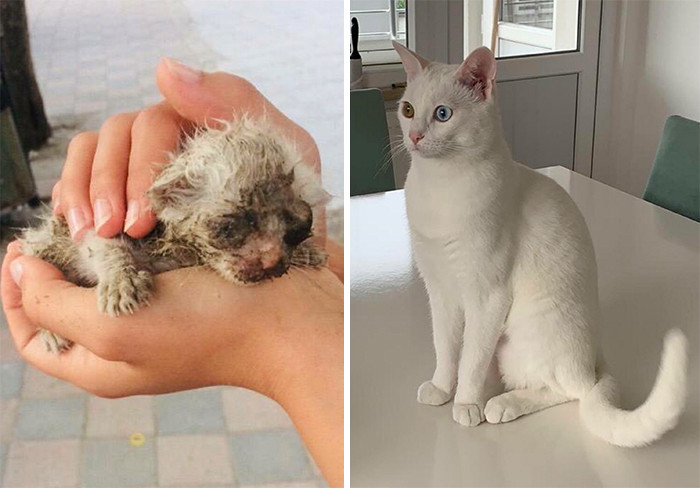 2. “Took A Chance, And Decided To Rehabilitate This Boy Instead Of Letting Him Be Put Down. One Of The Best Decisions Of My Life” 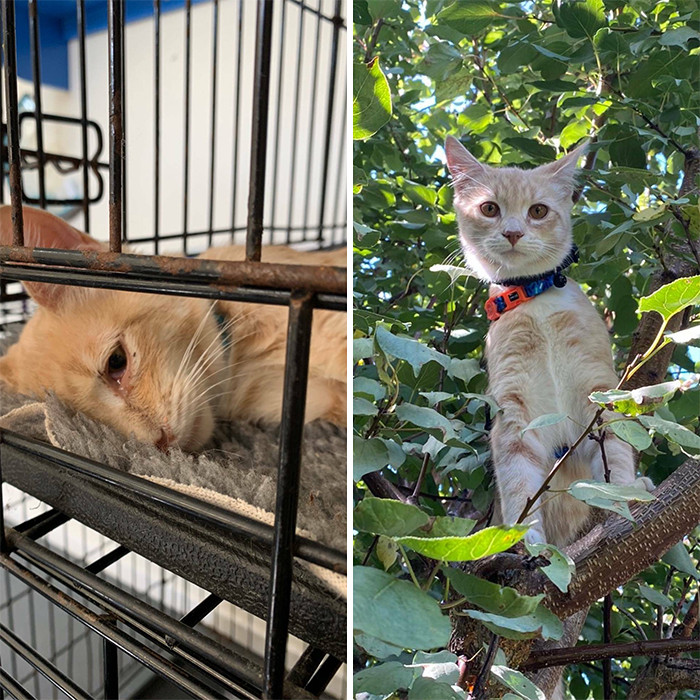 3. “What A Foster Home Can Do For A Sick Cat…now Misza Is Enjoying His Cat Retirement After Being A Neglected Feral For 15 Years” 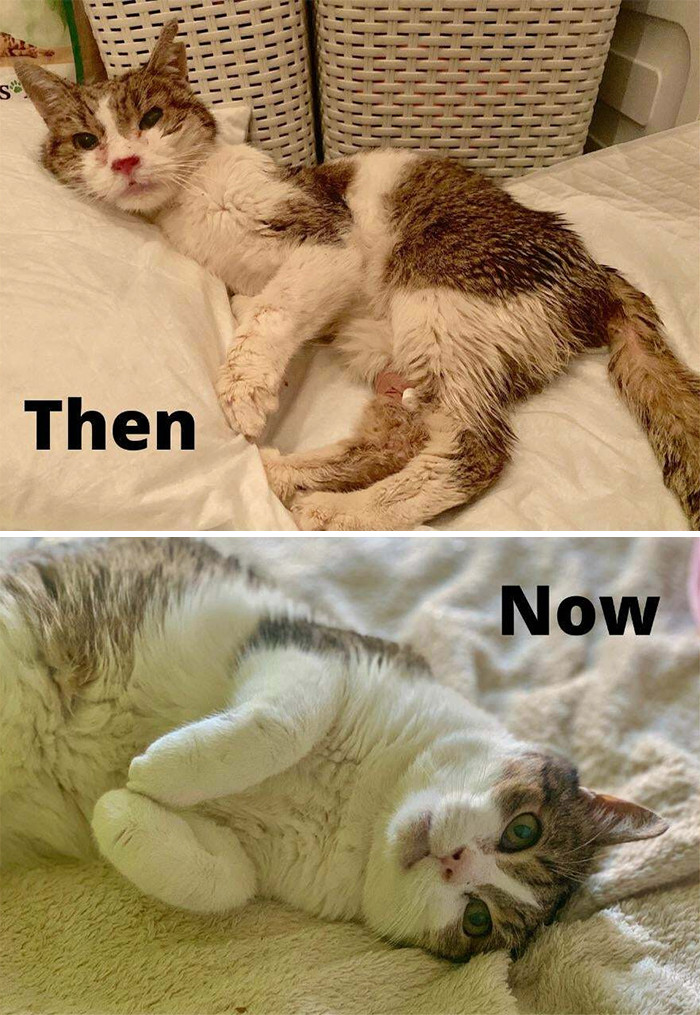 It’s estimated that around 35% of all households in the US have a cat. Sadly, some families weren’t really prepared to have a pet, so the poor cats were neglected, forced to live in bad conditions, and finally abandoned.

Keeping a pet is a great responsibility, cats included, and people tend to forget that when they first see those cute furballs. Very often, people lose interest when their pets grow up.

American Humane Society and ASPCA have checklists for all people who consider keeping a pet. It will help them to figure out if they are really ready for a pet.

4. “Toby And Quinton Were Rescued Together And Adopted As A Bonded Pair. Toby Has Ehlers Danlos Syndrome And Quinton Was Toothless. They Became Brave And Happy . Quinton Passed Away Recently, I’m So Glad We Had Him For The Time We Did And He Passed Knowing We Would Keep His Best Friend Safe” 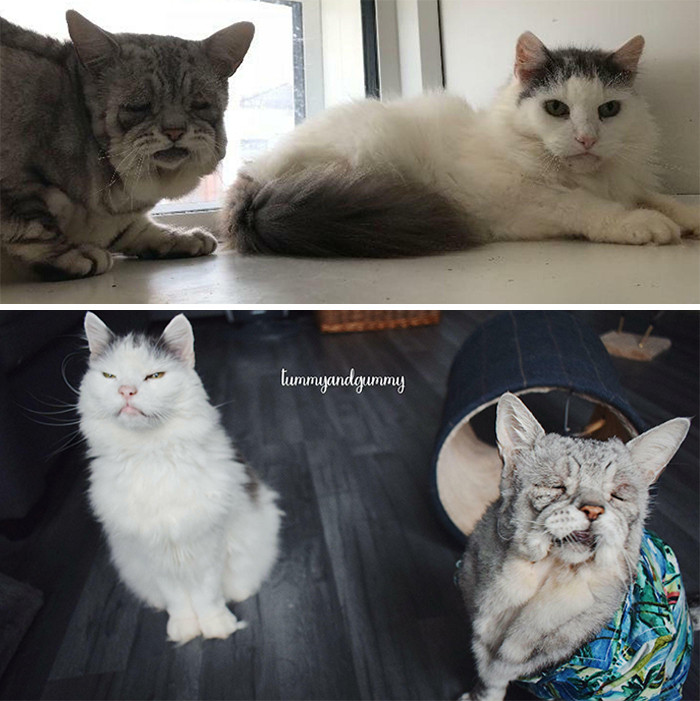 5. “8 Years Ago Today The Triplets Were Born. From Bottle Feeding Every 3 Hours, To Beautiful Lazy Babies. Bob, Possum, And Arwyn Made Me The Crazy Cat Lady I Am Today” 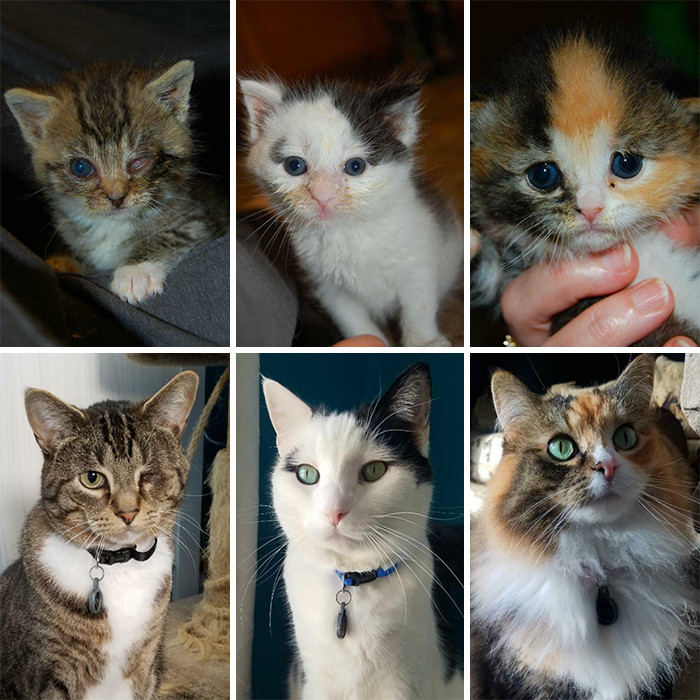 6. “Before And After. What A Transformation!” 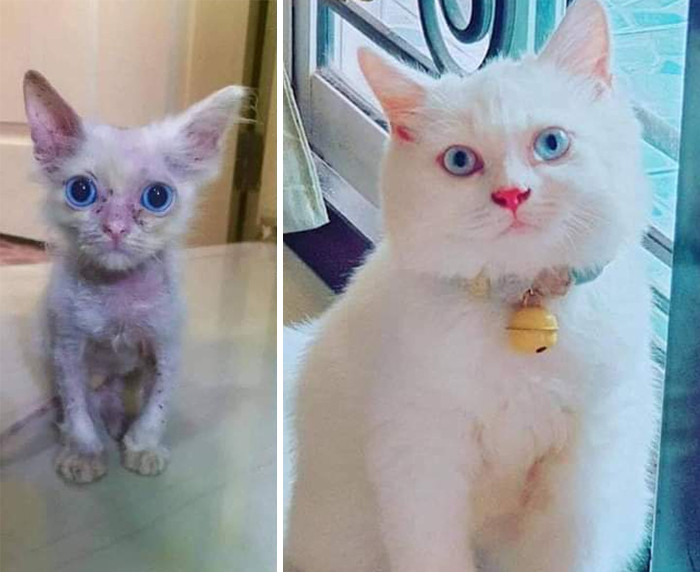 Matthew Bershadker, President and CEO of ASPCA, stated: “Helping vulnerable animals and keeping pets in safe and loving homes requires a commitment from all of us—advocates, pet owners, shelters, leaders, and entire communities.

When we work together under a common cause, we’re both saving lives and elevating our society and its laws to ensure cruelty victims and other at-risk animals receive the protection and care they deserve.” 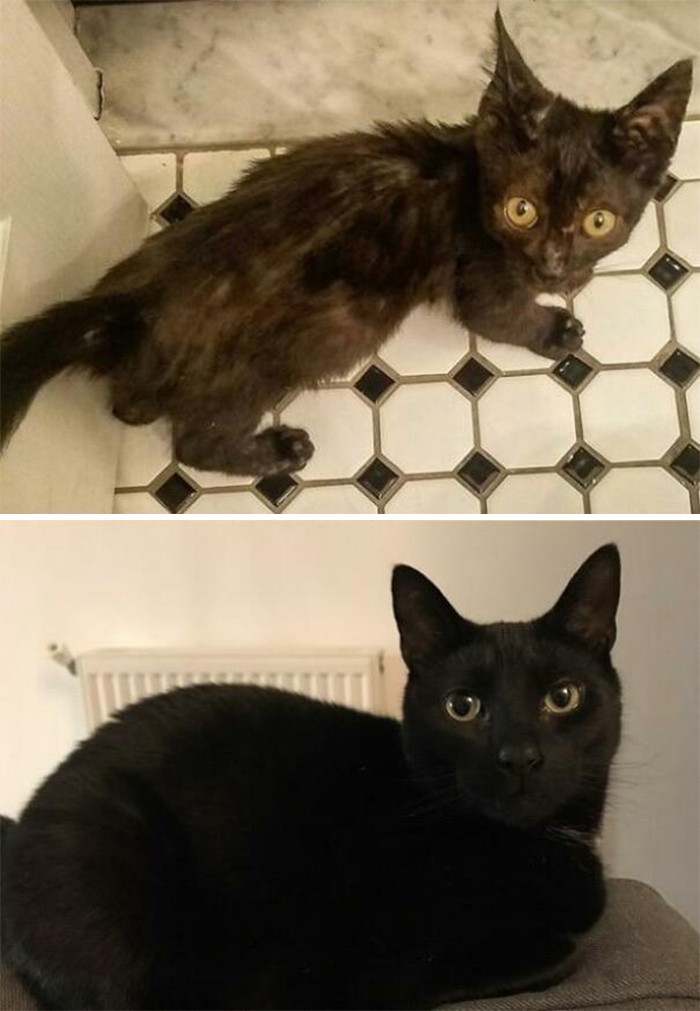 8. “A Local Vet Treated This Rescued Stray From A Bad Case Of Fungus/Ringworm Few Months Ago. Look At Her Now” 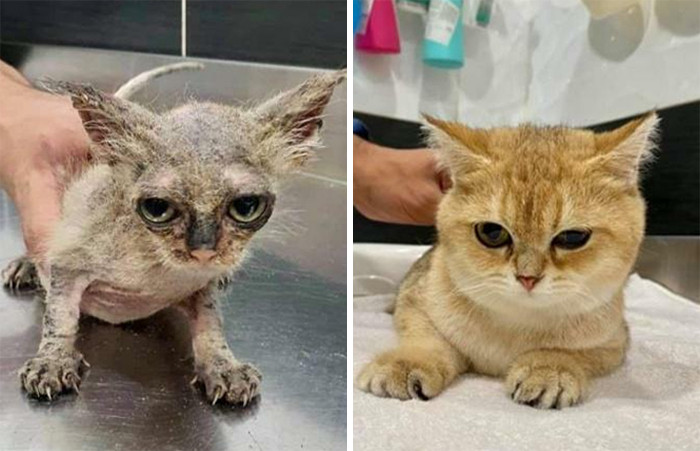 9. “Our Kitty Was Already An Adult In The Photo On The Left. A 6 Month Glow Up” 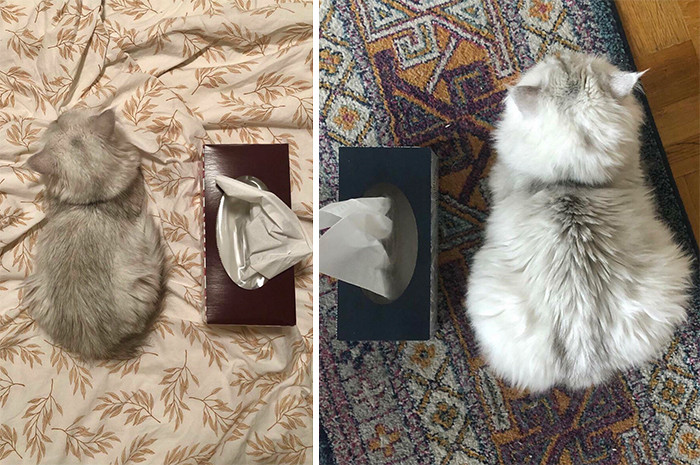 10. “My Mom Is A Realtor. She Went To Show An Empty House And Found That The Previous Owners Had Left Something Behind” 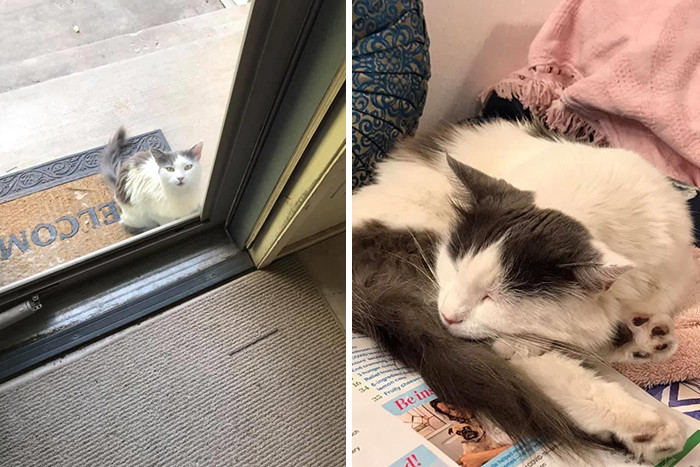 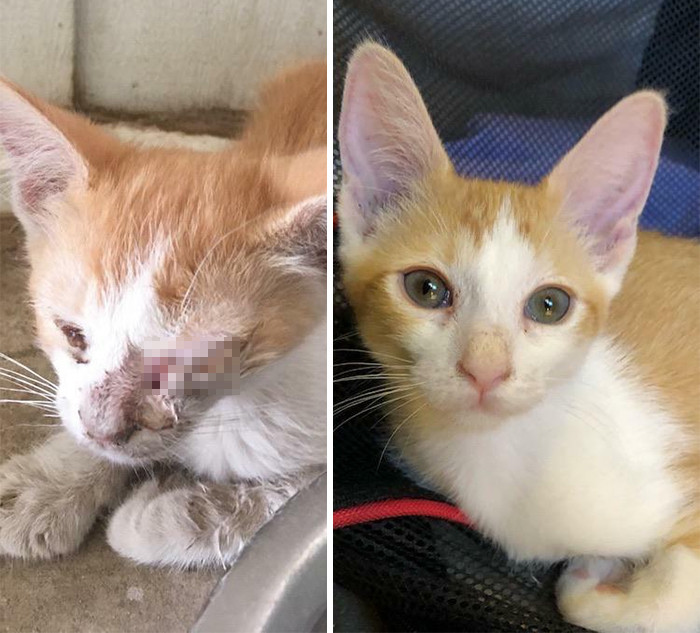 12. “Two Months Ago I Found Him Mangled, Probably Had Been Run Over, And Almost Dead Due To Dehydration. Vets Had To Amputate One Of His Front Legs And Tail. Today We Finally Took The Cone Of Shame Off And Let Him Chill With Us On The Bed” 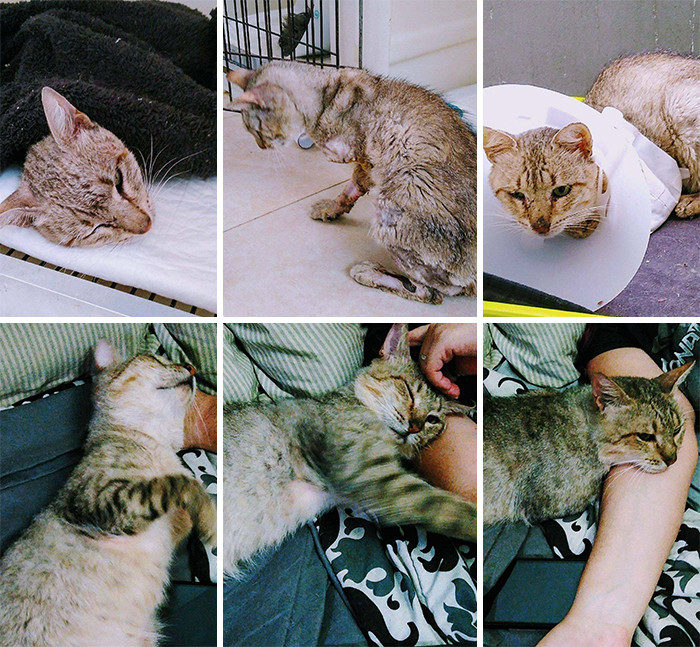 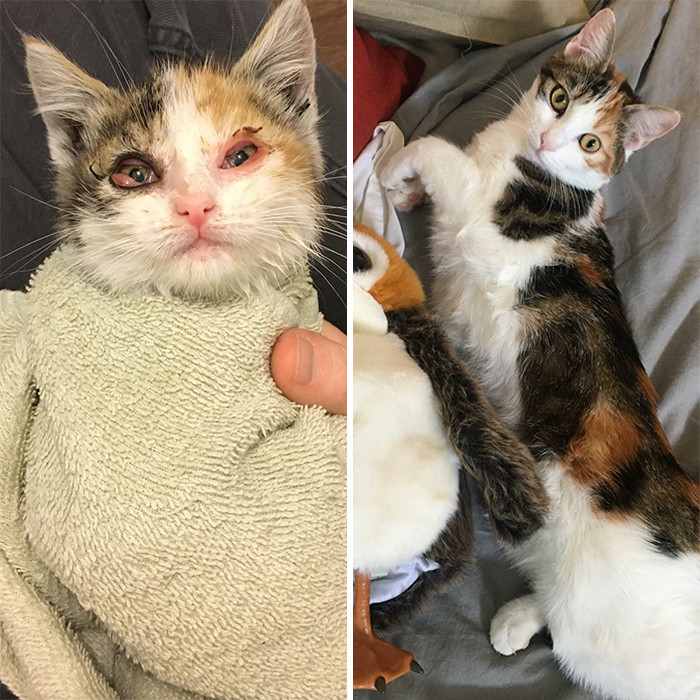 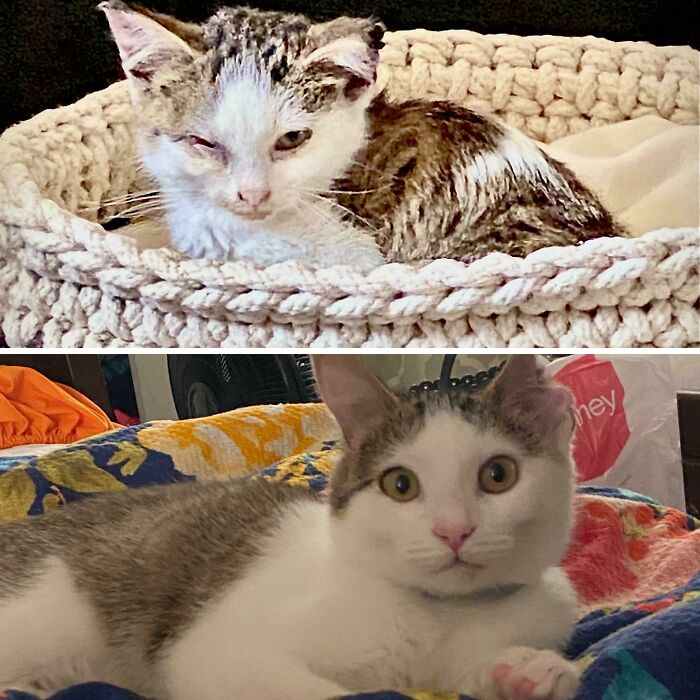 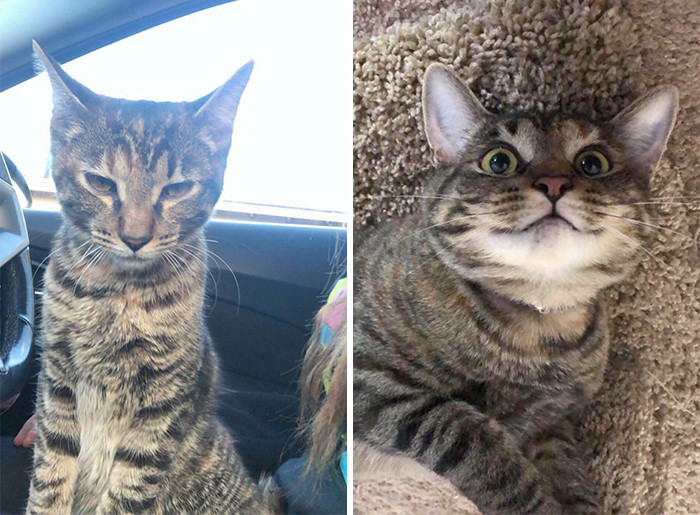 16. “From Being Found In Our Woodshed Two Years Ago With Wounds The Vet Believes Was From A Coyote , To Yesterday A Happy Healthy House Kitty. Meet Chip!” 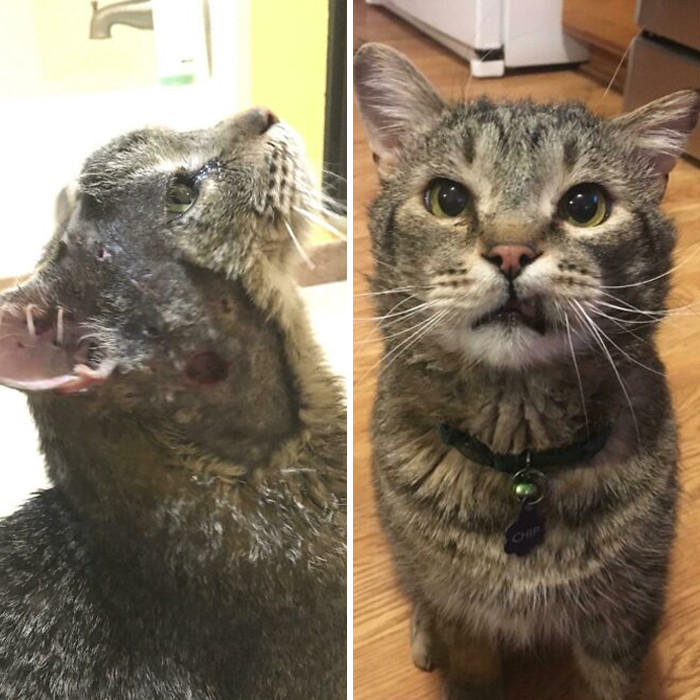 17. “I Found This Kitten Dumped In The Middle Of A Road Too Weak And Hungry To Get To Safety. The Photo On The Right Is What 6 Days Of Cuddles By The Fireplace, Lots Of Food And A Cosy Bed Can Do” 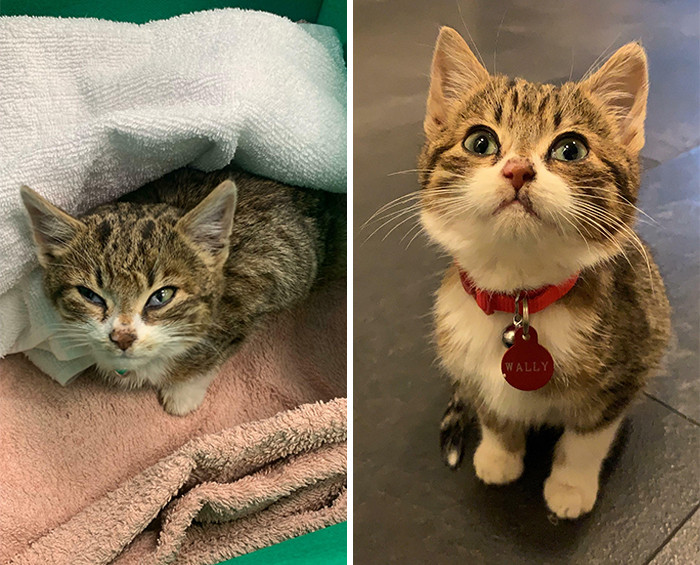 18. “When We Got Hilda She Was Very Underweight After Having Recently Given Birth; Somewhere In The Last 6 Months She Turned Into A Long Haired Beauty Queen!” 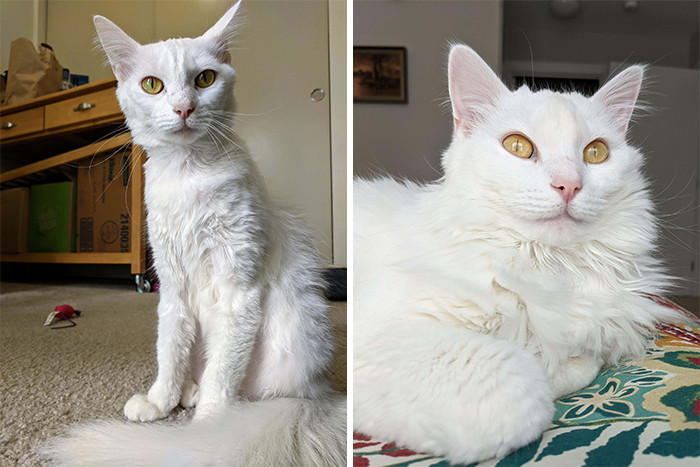 19. “Apollo Has Given Us Just As Much As We Have Been Able To Give Him” 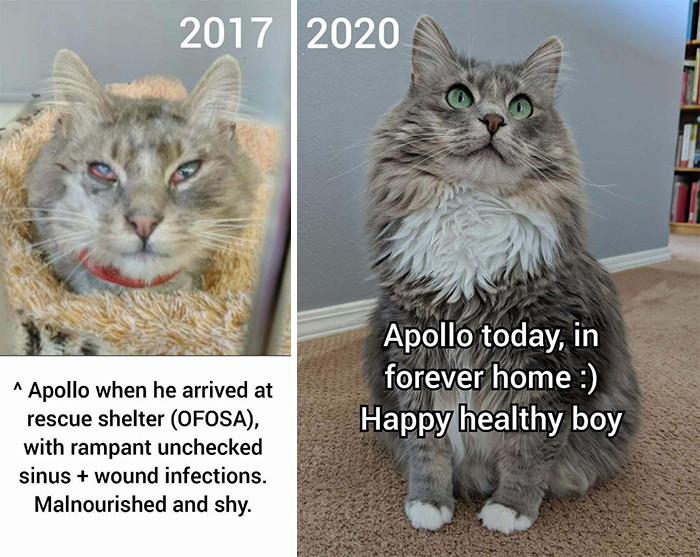 20. “After 6 Months Spent In A Shelter, They Thought He Would Never Get Adopted Due To Him Having Fiv. Now He’s Been My Bud For Over A Year And Living His Best Life” 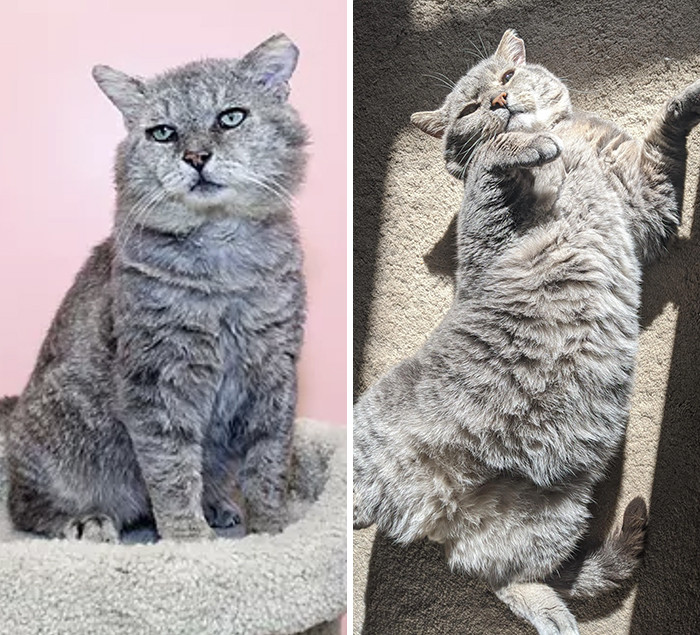 21. “2 Years Ago Today I Walked Into A Petsmart And Met A Cat Named Sonny” 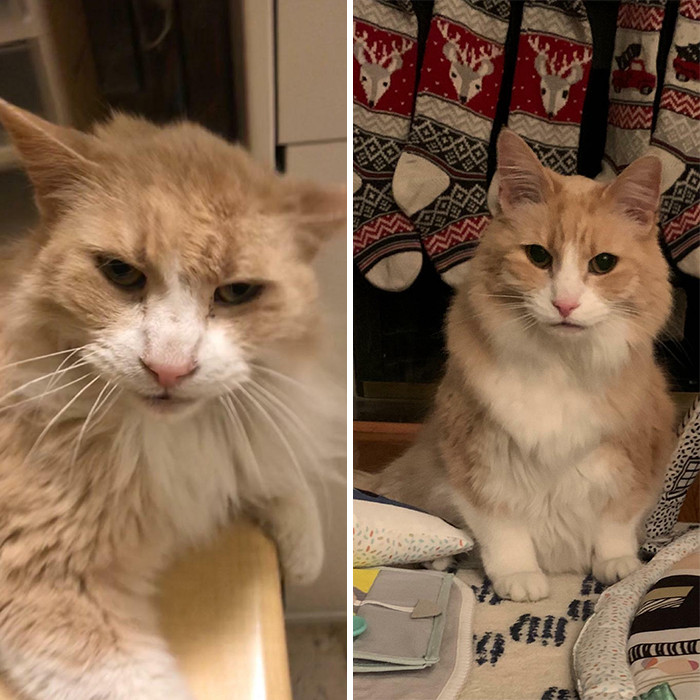 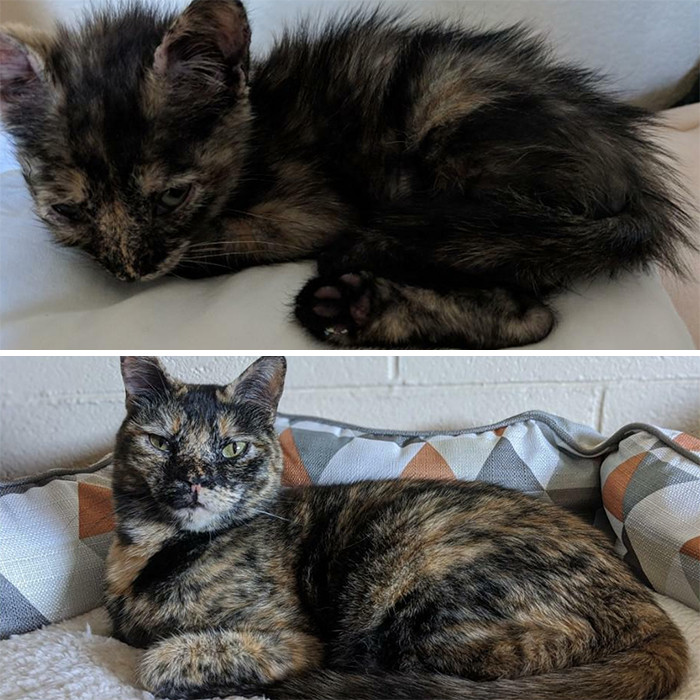 23. “This Is My Best Friend Lcdr Ryker. I Was Told You All Like These Kind Of Stories” 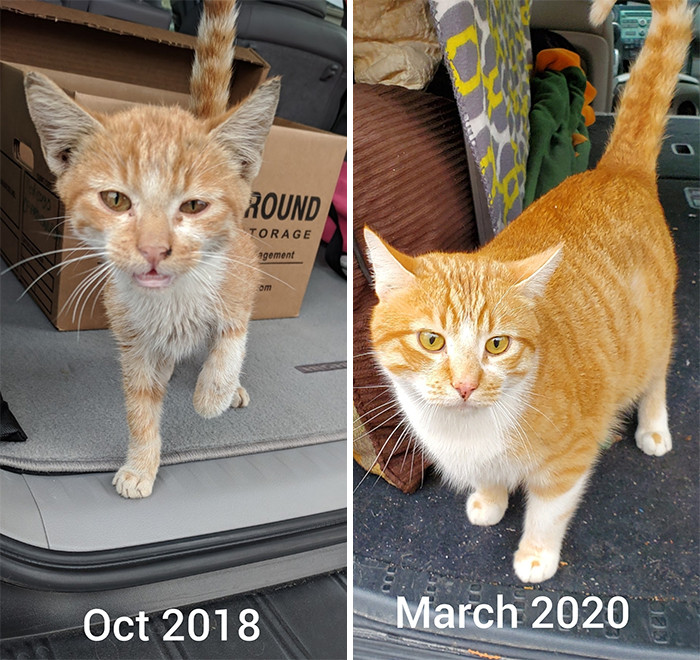 24. “Frank At A Couple Weeks vs. Almost A Year, Also Threw In The Christmas Photo With His Brother Teddy” 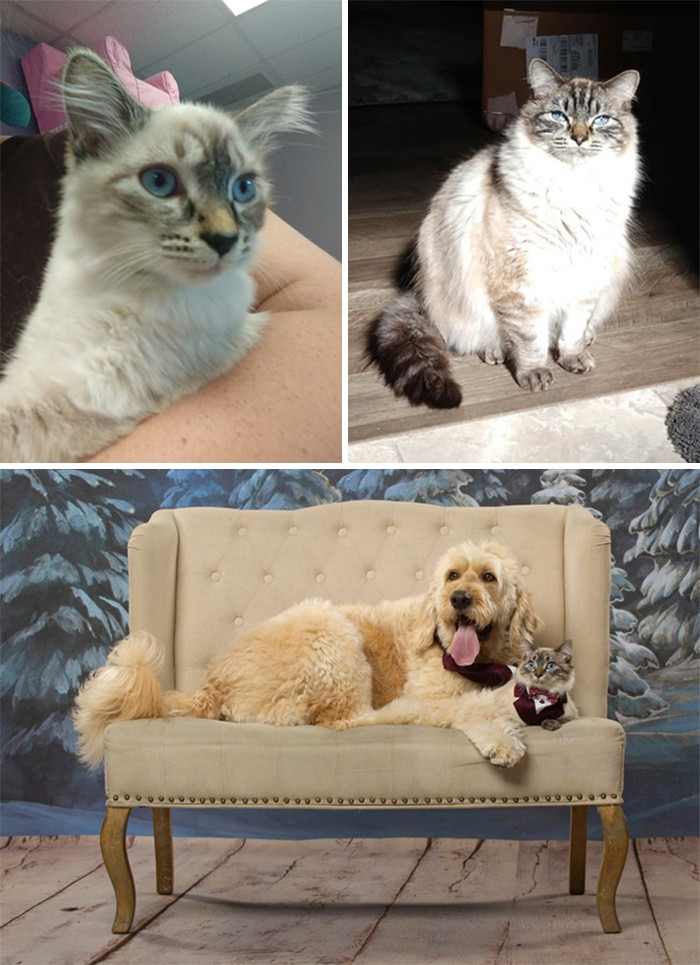 25. “Got My Feral Kittens At 4 Weeks Old And Now They’re All Grown Up” 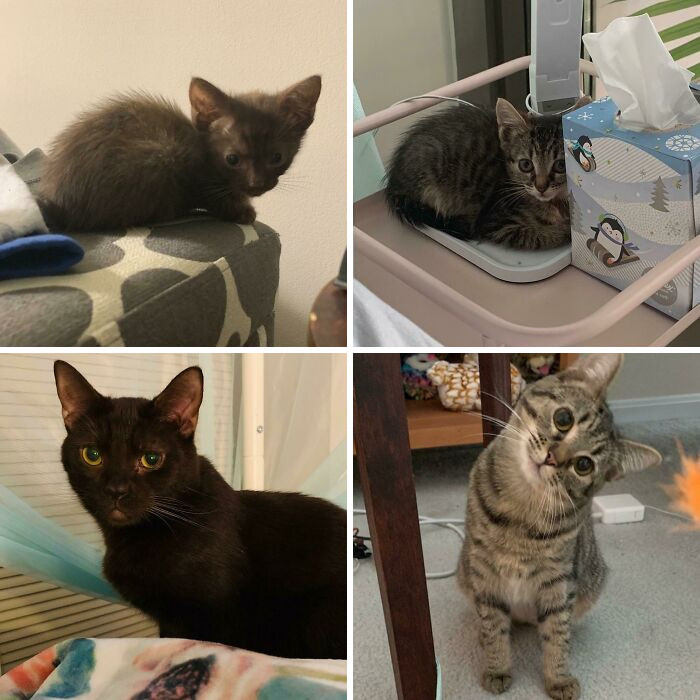