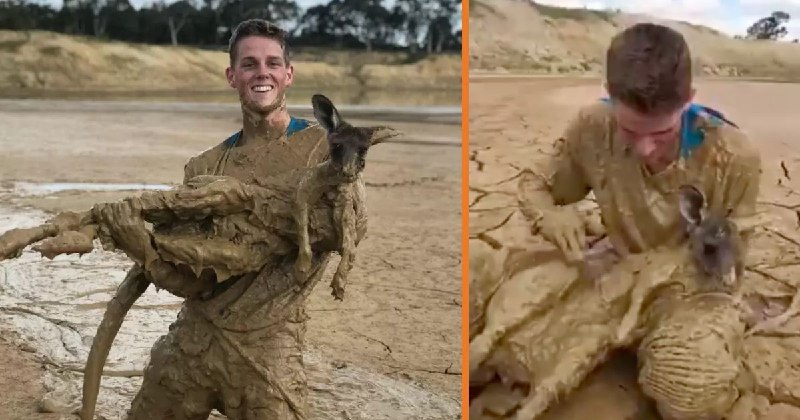 As two Australian teens rode their bikes near Sydney, Australia, they saw something strange sticking out of the mud: a head and two pointed ears to be exact.

Both age 19, Jack Donelly and Nick Heath came in for a closer look and what they saw broke their hearts.

They found a kangaroo who had wandered too deep into the mud and had got itself stuck neck-deep.

The roo was crying out and exhausted from trying to wriggle free.

The pair knew they needed to help, so rushed home to get supplies, tied rope around Nick’s waist, and waded into the mud, and Jack kept a grip on the rope from dry land.

The kangaroo relaxed as soon as it was free from the mud.

“The roo’s life was important to us so we went out on an arm and leg,” Nick Heath told TODAY.

“We think he went searching for water there, and it was really muddy so he got himself really stuck.”

The teens could see that the kangaroo didn’t look well so they contacted WIRES Australian Wildlife Rescue immediately.

“He was totally covered in thick clay, cold and exhausted,” a spokesperson for the rescue told The Dodo.

“Once sedated, he was slowly warmed, then washed in tepid water to get rid of all [the] clay that was coating him, then warmed up again slowly to get his body temperature up and given warm fluids.”

The kangaroo is now all cleaned up and recovering, with the rescuers keeping a close eye on him.

“It’s a pretty patriotic thing to do, and we feel proud,” Nick said. “If we saw something like that again, we’ll do it all over again.”