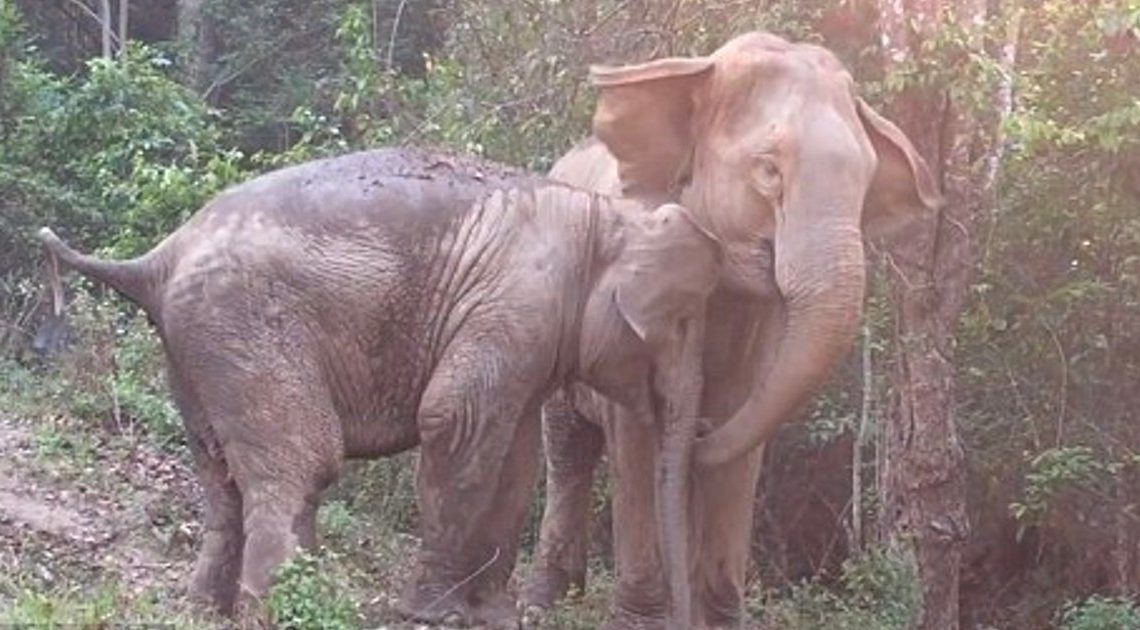 A touching video that shows an Asian elephant’s emotional reunion with her mother after years away, helping prove the old saying that an elephant never forgets.

Meet Me-Bai, the little elephant who can be seen nuzzling her mother, Mae Yui, in the Elephant Nature Park refuge in the north of Thailand.

The two joyfully flap their ears and caress each other with their trunks after a 62-mile trek through the Thai jungle.

When Me-Bai was just three and a half years old, she was sold to provide rides for tourists in Thailand. She didn’t get to see her mother, who also worked in the trade, for three years.

It’s especially tragic since females prefer to stay in herds until they die, forming really deep ties. They are rarely separated before the calf reaches the age of five years.

According to Elephant News’ YouTube channel, the tiny elephant left the tourism industry ‘because she [Me-Bai] was too young [and] began to lose weight and could not carry the tourists any longer,’

Me-Bai was recently rescued and transported to the refuge following a four-day, 62-mile (100-kilometer) walk in the scorching sun.

‘Me-Bai was nervous and wary of people when she first arrived at the sanctuary, but she quickly learned that her new caretakers had no intention of abusing her in any way,’ the sanctuary writes.

According to National Geographic, she was initially apprehensive of people but quickly adapted to her new surroundings.

When workers discovered Me-Bai’s mother worked in the adjacent tourism business, the proprietors agreed to retire Mae Yui so she could join her children at the refuge.

The emotional reunion between the two was captured on video for us all to enjoy.

It shows the elephants caressing one another with their trunks and flapping their ears in pleasure.

After an emotional half-hour together, the keepers suspected they may be afraid of being separated again.

When elephants are disturbed, they chirp gently and stroke each other’s heads and genitals, according to previous research done at the park by Mahidol University in Thailand and Emory University in the United States.

In the video, you can witness these actions.

Because elephant trunks are so sensitive, psychologist and elephant behavior specialist Preston Foerder of the University of Tennessee believes elephants communicate through touch as well as voice and sight.

Later in the footage, the two can be seen walking and eating together peacefully.