A VIBRANT COMBINATION OF BLUE, RED, AND GREEN, ALONG WITH HIS ELABORATE NECK FAN, MAKE HIM ONE OF THE MOST STRIKINGLY COLORFUL MEMBERS OF HIS SPECIES – MEET THE FAN PARROT! 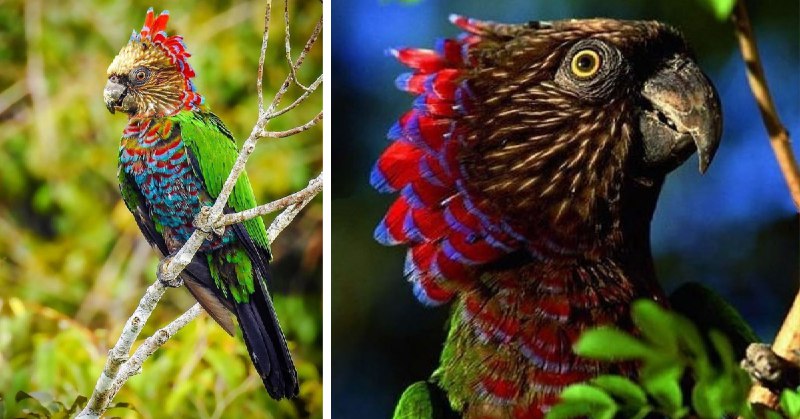 His vibrant, stunning good looks, and impressive fan, make him one of the most stunning members of his species.

The red-fan parrot (Deroptyus accipitrinus), also known as the hawk-headed parrot, is an unusual New World parrot. This parrot is known for its striking elongated neck feathers that can be raised at will to form an impressive, highly elaborate neck fan, increasing the bird’s apparent size to any would-be attackers. They are generally green in color, with brown lores and cheeks, possessing whiteish streaking. Elongated nape feathers and underparts are dark red with blue edging.

Their under-tail feathers and flight feathers are greyish-black. Their feet are grey.

Males and females are almost identical and virtually indistinguishable from one another.

These birds are endemic to much of South America, particularly in the Amazon Basin, from the Guanas and the eastern part of northern Brazil. Their range continues westwards to southeastern Colombia, northeastern Peru, and southern Venezuela.

Red-fan parrots prefer to live amongst forest and or savannah woodland up to an altitude of 400 meters. They avoid flooded areas and cleared woodland.

This parrot likes to feed in canopy fruits, seeds, flowers, and nuts, as well as other vegetable matter. They especially like palm fruits and guava.

In the wild the breeding season is from November to April, Red-fan parrots like to nest in abandoned woodpecker holes. Preferring to be about 10 meters above the ground. A clutch of 2 to 3 eggs is laid within and incubated for about 28 days. Young become fledged in about 9 to 10 weeks from hatching.

Red-fan parrots are a threatened species, mainly to the caged bird trade, along with habitat destruction due to deforestation.

WATCH AND LISTEN TO THIS PARROT RIGHT HERE BELOW:

Not Only The Smallest He Is Also Said To Be The Most Colorful, Making Him A Stunning, Multi-faceted, Living Gem!

Please SHARE this video with all your bird-loving friends and family.