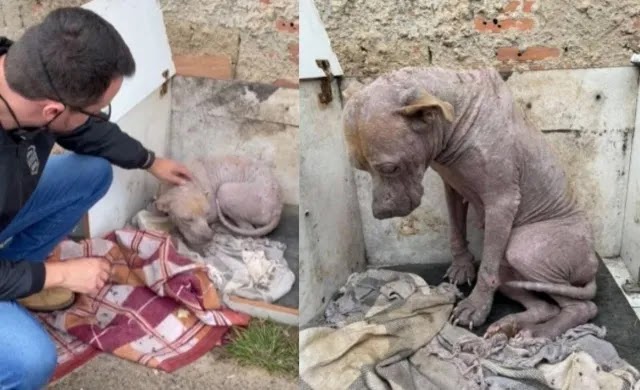 This sick and injured dog was rescued by the authorities of the Brazilian state of Paraná. Her condition reflects the suffering she experienced on the streets.

The pitbull dog was abandoned to her fate and shows great sadness when she is rescued.

Humans can be very ruthless towards animals, even their own pets. The internet and social media are full of stories of abuse, neglect, and cruelty. And it’s no accident that animal shelters go out of their way to help as many dogs and cats as they can. Fortunately, there are also compassionate and responsible people who decide to save the lives of dogs suffering on the streets. This is the story of a dog rescued in Paraná, Brazil.

The rescue took place after investigator Cassio Silva and representative Mateus Laiola received a call to rescue a pit bull dog that was in a very precarious situation in the Parolin area. According to Silva, the dog is suffering terrible cold due to the low temperatures. In the video of the rescue, you can see how she was shivering uncontrollably because of the cold and possibly because she was afraid of the people who rescued her.

A new impulse to life

The dog, baptized as “La Niña”, is frail and malnourished, her delicate skin is in the worst condition and she has open wounds on her body. As researchers have shared through Facebook, Niña suffers from scabies in an advanced stage. That’s why her skin and her fur are in the current state. Fortunately, da Silva and Raiola, along with activist Mari Hedler, have already made sure she gets treatment. Here you can see her visiting the vet and being happy.

Silva says that Nina is very sweet and caring and that she will receive treatment to cure her illness. In the publication in which she announced her rescue, she warned that she would need a lot of care and the help of the public.

Later, after a visit to the vet, Silva hinted that he could adopt her and give her a second chance at life in a home where she would receive all the love she deserved from him. However, Silva also points out that there are still many dogs on the streets that need help.