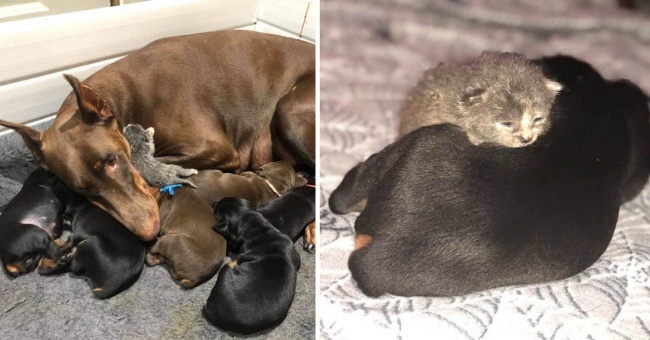 A dog had just had her litter when her owner brought home a kitten she had rescued. Soon, the kitten found the love of a mother. The image became a trending topic on Facebook.

Brittany Callan, who lives with her family in Geneseo, New York (USA), found a small kitten, believed to be abandoned by her mother, very close to where her husband worked. Without hesitating twice, the woman decided to take the cat home without imagining that her pet, a four-year-old Doberman named Ruby, would soon adopt it.

The adorable dog is raising a litter of six precious puppies born a few weeks ago. Her mother’s loving heart never refused to feed the little orphaned kittens, who desperately needed her mother’s warmth.

A Doberman pinscher takes care of an orphaned kitten as if it were her own.

The family always had other species of animals in the house, such as rabbits, guinea pigs and turtles, and Ruby always treated them with great affection and took care of each one of them. Of course, Ramblin Rose, as they decided to call the kitten, was no different.

Brittany told USA Today: “She would be a mother to anyone who needs her. We have had bunnies, guinea pigs, chickens and ducks. Ruby licks them like she’s cleaning them, like she’s the mother of it.”

The dogs quickly accepted the kitten as their own and began to feed and care for them as they would any other baby. She is a loving girl.

Ramblin Rose will be cared for by her canine mother for a few more weeks, making sure she is getting the nutrients she needs to grow properly. Of course, Brittany has added a bottle of ready-made kitten formula to her adoptive mother’s milk diet. The double approach that the little feline receives seems to have a positive impact on its development. In a short time Ramblin Rose has gone from 4.37 oz to 7.27 oz. For her part, Ruby doesn’t just pay attention to feeding, she makes sure the dog stays close to the kitten and keeps him safe with the rest of the litter.

As soon as the orphaned kitten is big and healthy, it will be happily adopted by the couple’s relatives, as the other dogs in the family don’t seem to like cats as much as sweet Ruby. 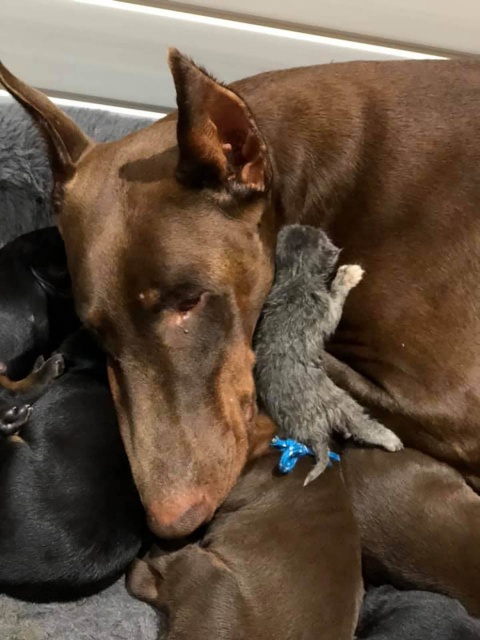