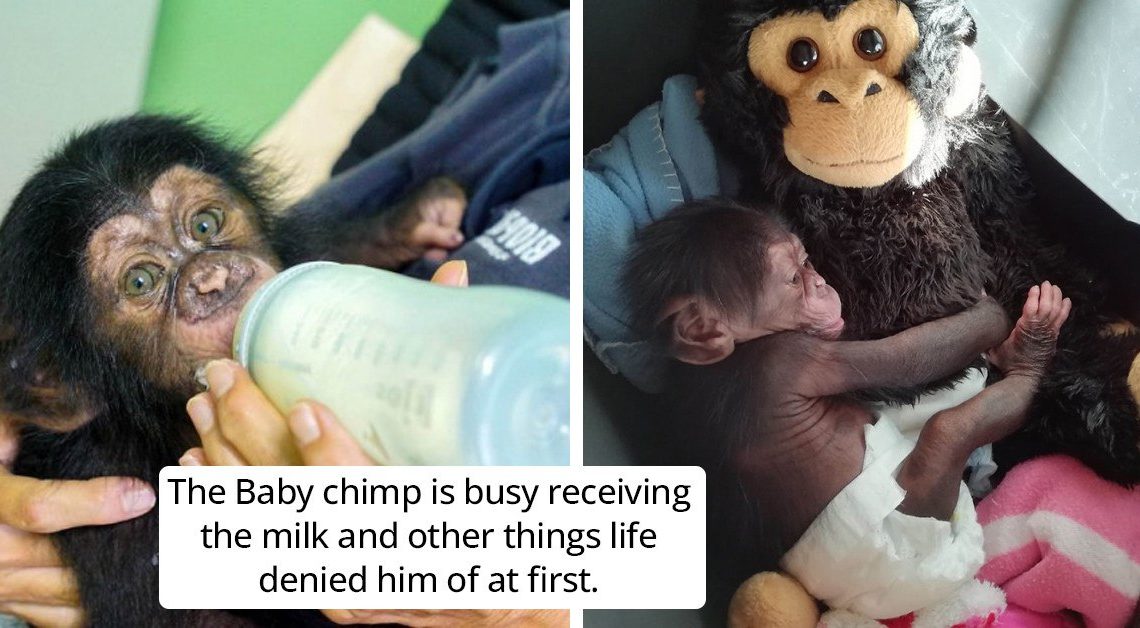 Djibril, a cute baby chimp, was born at a zoo in Malaga, southern Spain, where his parents kept him. Even though he was born into a loving family, he was tragically abandoned by his mother, who refused to care for him.

Sadly, but how can anyone judge her because she was saved from a circus and had gone through a lot of hardships. For the majority of her existence, Kika has been held in captivity, therefore she has no maternal instincts and was unable to raise her child.

Once escorted to Valencia’s BIO PARK, an animal park, life smiled back at him in unexpected ways, making it all the more enjoyable for him!

Now, the Baby chimp is busy receiving the milk and other things life denied him of at first.

Soon after arriving, Djibril was seen cuddling with one of the stuffed monkeys that had been brought in for him. Because they wanted him to feel safe, the amusement park employees gave him the plushie.

The staff presented Djibril to Malin, one of the ladies, but she was uninterested in him. Djibril’s life changed dramatically when he encountered Eva, who instantaneously fell in love with him and accepted him as her child.

Djibril is prospering with his new family, and he appears to be happier than ever. Aside from this, the center believes that he can play a significant role in protecting the Western Chimpanzee species.

Conservationists hope that this will inspire people to protect animals in the wild and help save endangered species. This is a great example of perseverance on an animal’s part and of how they will fight to survive no matter what.

Amazingly, chimpanzees are close to humans. Humans need to treat these endangered species better or else there will be none left in the wild!